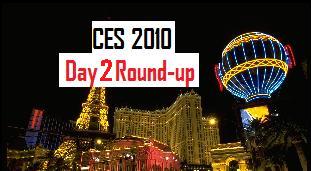 It may have gotten off to a dull start thanks to the lacklustre showing from Microsoft, but CES 2010 today threw up some really nice surprises. Keep an eye out for the Light Blue Optic’s Light Touch here in today’s round-up, and be prepared to be blown away.

HTC unveils the Smart, their first budget smartphone
You might recognise this one from last years leaked HTC product roadmap

Dell tease mini Android based tablet, the Streak
It’s like an Archos internet tablet. But red.

Lady Gaga new creative director for Polaroid
No, it’s not a wind-up, she’s got herself a real job

Light Blue Optic’s Light Touch turns any surface into a touchscreen
Amazing emergent tech, and the most exciting spot of the day so far in my opinion

Microsoft’s Steve Ballmer opens CES, but does anyone care anymore?
It’s a pretty boring display from the PC giants

The five hottest e-readers
Another gallery rundown, this time of the best e-readers so far seen at CES 2010

Is this the hottest TV of the year? Samsung’s 3D LED 9000
Real-time 2D to 3D conversion on its way