Pico-projectors are all well and good when it comes to the portable beaming of presentations and movies when on the go. The problem with many of them however is that an array of video and audio cables are needed…

The beauty of CES is that it can throw up little gems from the most unexpected of places. Ever heard of Light Blue Optics? Nope, neither had we. But after taking a look at their Light Touch interactive projector,…

Last time we heard from WowWee, they showed Ashley a robot at last year’s CES. I guess they decided that there’s not much money in robots, because this year they’ve got a bunch of cheap, tiny, but remarkably attractive projectors instead.

From left to right, there’s the “Stick”, which takes SD cards, but also has some internal memory, the “Station”, which lets you both dock your iPod and display its contents, and the “Swivel” which has a 90° hinge, letting you project your videos skyward. It also packs a three-hour battery life, for those long sessions of lying on your back. No pricing or availability yet, beyond “2009”.

Find more CES coverage here. Tempted? I sure am.

Here’s the Optoma Pico pocket projector, for all the “must beam something onto a wall” moments that occur so frequently on the go. No, I’m being mean, there’s a whole wealth of uses for something like this – especially because it can project an impressive 60″ picture from 2.6m away.

It’s the perfect thing for showing off your holiday photos round your parents’ house, or entertaining a nephew by letting him play his Wii on a 60″ screen, rather than the crappy little 17″ TV he’s stuck with. There’s umpteen thousand business uses, too…

As if the tinny sounds of MP3s ringing out of cheap Chinese speakers everywhere you go nowadays wasn’t bad enough, Texas Instruments is about to UNLEASH HELL – and bring fully-functional projection cameras to mobile phones before the end of 2008.

With all the talk of pico projectors in the past, we expected the first commercial arrival to be some much-hyped, high-end phone. Not a small media player from Hong Kong… 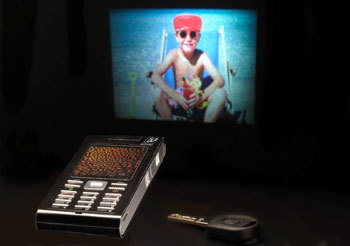 We’ve been talking about this for some months, but until this week, Texas Instruments’ pico projector technology was just a concept. Not anymore – the DLP Pico chipset is now in production, with availability from mid-2008. 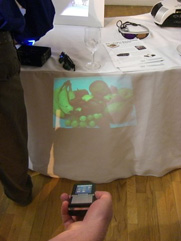 We’ve heard about mobile phones projecting images before, with Motorola announcing several months back they’d signed a deal ‘pico projector’ firm Microvision, and even rumours that Texas Instruments were interested in the technology, but this is the first time we’ve seen hard evidence it’s possible. And, would you believe, Texas Instruments pipped Motorola to the post.

If you’re scratching your head wondering why Texas Instruments sounds familiar to you, it’s because they’re the people who put digital light processing (DLP) chips inside projectors and televisions. Add mobile…