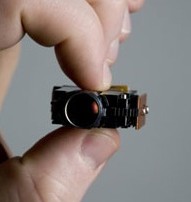 As if the tinny sounds of MP3s ringing out of cheap Chinese speakers everywhere you go nowadays wasn’t bad enough, Texas Instruments is about to UNLEASH HELL – and bring fully-functional projection cameras to mobile phones before the end of 2008.

John Van Scoter, company senior vice president of TI’s projection business, reckons that companies are already building devices using the TI Pico projector – and they’ll be ready to ruin public spaces across the developed world by the second-half of this year.

Is anyone free this weekend? Only we’re going to spend it building a robot and a time machine, to send back in time to 1929 to assassinate the founder of Texas Instruments and stop this LIVING HELL from ever being released upon society.