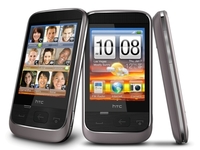 Starting out at a “more aggressive price point”, the Smart will be an entry level, low-spec smartphone, or so we’re told.

There still little known in terms of exact specifications for the device, but here’s what we know so far. It’s using Qualcomm’s BREW platform, making consumers and developers alike happy, allowing for Flash video playback and easy coding for new apps.

The HTC Sense UI is still in there, so there is likely some sort of social networking apps working under the hood, though so far it doesn’t look like it’ll support Wi-Fi connections. That’s strange considering the Sense UI, so that’s likely to change. There’s also a 2MP camera on board, but no video capture.