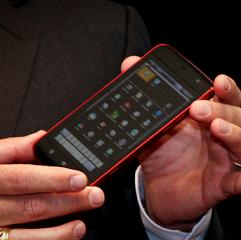 We knew CES 2010 was going to be awash with tablets thanks to Apple’s rumoured device, and bang on cue, here’s another one from Dell.

Dell, true to form, are keeping tight-lipped on the exact details of the device, though the one on show’s 5 inch display was said to be Android powered.

“It is 5-inches, however we are working on different screen sizes and form factors,” said a Dell spokesman.

Looking similar to the already-widespread Archos internet tablets, the device will let users surf the web, listen to MP3s, watch videos, and likely come with at least some rudimentary App service.

No info yet on 3G connectivity or built-in SIM cards, but we’ll pass on the news as we get it.

UPDATE: Engadget have got a name for the tablet now. It’s called the Streak, and it will also have a camera built into the back. Pocket Lint’s Stuart Miles can now also confirm that there is a SIM slot in there too. Good work guys!

One thought on “CES 2010: Dell tease mini Android based tablet, the Streak (UPDATE)”