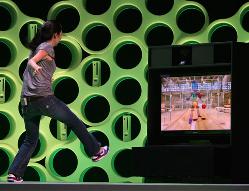 Though Steve Ballmer’s Microsoft keynote conference was a little on the dull side, he did reveal a bit of info sure to please gamers the world over. It’s official; Project Natal will be hitting your Xbox 360 console by Christmas 2010.

Microsoft hope the motion control add-on will entice new gamers to its popular console, going head-to-head not only with the established Nintendo Wii motion based console but also the soon-to-be-released Sony “magic wand” offering.

No pricing details yet, but we’ll let you know as soon as we do.