I’d like to say that I got hands on with Sony’s new internet personal viewer the Dash at the show tonight, but the models on the stand didn’t appear to be live but just featured clips of what the device could do. Anyhow it is certainly an intriguing little box. I guess Sony envisage that you’ll put it in your kitchen and use it to hit Jamieoliver.com when you need some recipes, It is also good for other basic like the weather, news and of course social networking. In some ways it reminds me a little of this, but without the DAB radio.

It woks via touch screen and updates via a Wi-Fi connection to your home network. It can also playback video, audio and i9ntenet radio (Spotify would have been an amazing addition are you listening Sony?) and has built in speakers and headphones jack. Sony also has over 1000 apps ready to go for the device too.

What makes me think that this might be winner though is its price. It goes on sale in April for around $200 which sounds perfectly reasonable and a great deal cheaper than a few tablet PCs I could mention.

So come on Sony get this to the UK ASAP. I really want one. Btw apologies for the whispering on the video, but the press conf was still going on when I shot it. 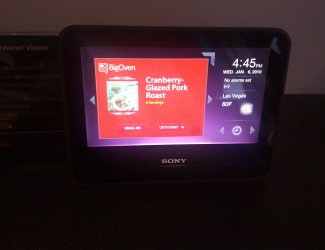