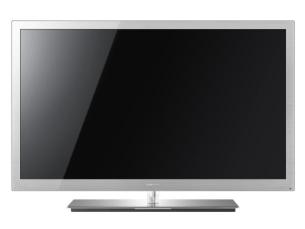 Samsung today took the wraps off what might just be the most desirable TV set on the planet, well until Sony and Panasonic have their press conferences anyhow. The LED 9000 is a top-end LED set that was greeted by gasps of admiration from normally fairly cynical hacks when it was unveiled this afternoon.

So why is it so special?

1 It is 3D – well so is a lot of what Samsung is going to deliver this year. Many of its sets will be compatible with Blu-ray 3D (it has a blu-ray 3D player coming in the spring too) and 3D broadcasts (like our own Sky). To watch the transmissions you have to don 3D glasses, but even they look cool.

2 It converts 2D content to 3D – Apparently the Samsung processor will take 2D content and turn it into 3D on the fly. This includes both content on disc and broadcast content. This sounds great in theory, but I’ll revere judgement until I see it live

3 It is .3inches thick! – There was an audible gasp when the set was turned on its side to reveal a depth that Samsung claims is the same as a pencil. It really is astonishingly thin.

4 It has a very smart remote control – Apparently it has a screen integrated into to it so you can watch live TV on the remote control while you have a Blu-ray on the main set.
It looks like a pretty amazing set – will find out prices, availability and dimensions asap.

5 You can get apps for it – Samsung is working with developers to create apps for its series of TVs. There will be a Twitter app plus Netflix, YouTube and USA Today.

TechDigest at CES is sponsored by Best Buy. For more CES stories and
videos go here.