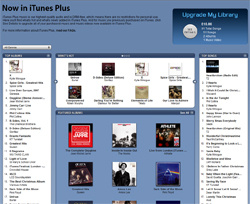 After a pause to take in the Nokia World show, I’m back on track with our roundup of digital music trends. So far, it’s covered topics like ad-funded music, console game downloads, governments cracking down on file-sharing, Radiohead-style choose-your-own pricing, and gnarly old rawk bands getting down with Web 2.0 technology.

The next batch of five are DRM-free music, artists throwing hissy fits about iTunes, the record industry’s fight against BitTorrent trackers, new forms of interactive radio, and the rise of MP3 blogs. But it starts with the biggest of those…

Perhaps THE big story of 2007 in digital music was the move towards selling DRM-free music, which in most cases meant unprotected MP3 files. That wasn’t the case for Apple when it announced its iTunes Plus initiative, mind – the tunes there come in the AAC format. Still, Apple’s decision to drop DRM made a big impact.

I should get one thing clear though: hundreds of independent labels have been selling DRM-free music for a long time, through stores like eMusic. So the story of 2007 was the changing attitudes of the major labels, with EMI leading the way when it went DRM-free earlier this year – the spark for iTunes Plus.

Since then, there’ve been a number of developments. Apple recently dropped the price of iTunes Plus downloads to match DRM’d files, while Amazon launched its own entirely DRM-free music store in September. Even Microsoft, which is a big player in music DRM, started selling unprotected files through its Zune Marketplace store.

Do DRM-free songs sell more copies than their protected equivalents though? UK etailer 7digital says they do, reporting that DRM-free files outsell protected ones by 4:1. The company has signed big deals with the likes of Pink Floyd and the Rolling Stones as part of its push towards DRM-free.

EMI’s rivals haven’t exactly rushed to follow in the label’s footsteps, mind, despite pressure from UK music retailers. However, as we move into 2008, the bandwagon is rolling once more, with Universal Music Group running trials, and even DRM-fanatic Warner Music Group reportedly weakening its resolve to keep protection.

Radiohead might have been innovative with their choose-your-own pricing approach to their ‘In Rainbows’ album, but in other respects they’re more disappointing. They’re one of the few bands to refuse to sell their albums on iTunes, due to not wanting them to be available as individual tracks. AC/DC take a similar view, while recently Jay-Z also shunned iTunes for the same reason.

It’s a shame. Put simply, the musical world is changing, and a lot of people simply don’t think of an album as a unified piece of art to be listened to solemnly from start to finish. People sample, they share, and then they cherry-pick the songs they like, and leave the ones they don’t.

It must be frustrating for bands who feel they’ve created something special, only to see fans not buy the experimental bits / in-between-song skits. But the fact is, the way people buy music has changed: the artists might have made the music, but who are they to try and control how people are allowed to purchase it?

It was easier in the old days for the music industry, when there were a set number of P2P file-sharing services that could be taken to court and, in most cases, eventually shut down. It’s a different kettle of fish now thanks to BitTorrent, with hundreds of trackers around the world, which have to be shut down individually.

The highest profile example is UK-based OiNK, which was shut down in October, but there have been raids around the world, with music industry body the IFPI working with local police on the prosecutions.

The trouble for the industry is that Torrent trackers and similar sites keep springing back up. So OiNK may be dead, but Waffles.fm is a ready-made replacement. Even old-skool Torrent trackers like Suprnova are being relaunched. And new services are appearing too, such as Picky Pirate, which mashes up Metacritic charts with popular Torrent sites.

Radio isn’t a one-way medium any more. Technology firms are bringing new forms of interactivity to it, with the latest example being Cliq, a mobile application that lets you check out the most recent playlists of radio stations, and click through to buy tracks. All four major labels have signed up to the service, which has just gone live.

Meanwhile, a similar idea differently implemented can be seen in the emergence of iTunes tagging in the US, which comes with HD radios from JBL and Polk Audio (think the US equivalent of DAB, although that’s a bit of a simplification). Anyway, the radios have a button which lets you, when a track you like is played on a station that supports the technology, buy the song from iTunes.

More of this sort of thing, please! Although one complication is the way songs tend to get radio play before they actually go on sale, which could be frustrating for consumers using this technology.

If you’re afeared of BitTorrent, MP3 blogs represent an alternative way to get hold of free music. They’re blogs, which also post MP3s (you could’ve guessed that from the name) – with Hype Machine being the most prominent example.

However, they’ve been the subject of a controversy recently, after a Guardian article claimed that they’re actively damaging the sales of music, particularly from the cool independent labels whose artists they tend to champion (which conversely are precisely the labels who often can’t afford to lose that many sales).

Not everyone agrees though, with one industry commentator claiming the MP3 blogs should be seen as “advocates, not pirates”, because they attract “active fans seeking out new and interesting sounds in a particular area”.

The argument could run and run. Some people have even suggested that MP3 blogs could become the new record labels, actually releasing songs by the artists they discover. They’re clearly going to continue having a big impact on the music industry, whatever.