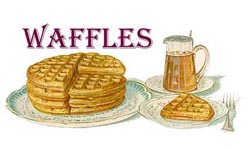 Music site OiNK was shut down last month after raids by the British and Dutch police, following complaints from the music industry about the way users were trading pre-release albums. Since the closure, users have been casting about looking for a replacement – and there’s no shortage of candidates.

The latest to emerge is called waffles.fm, which is rumoured to be the work of piratical campaigners The Pirate Bay (although, to be honest, any new music site that annoys the record labels is rumoured to be down to them).

This speculation’s got legs though, since last week it was reported that The Pirate Bay was planning to launch an OiNK replacement called BOiNK. However, the boink.cd website now has a picture of waffles, and a link to a Google search for ‘what to use instead of oink’ – leading users to waffles.fm. Curiouser and curiouser.

One thought on “What to use instead of OiNK? Waffles.fm wants to be the answer”