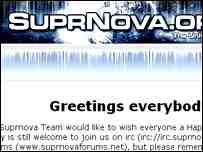 Apologies to those of you who buy all your music and films legally, and wouldn’t know a BitTorrent stream if it came up and slapped you in the face. You probably won’t care much about this story.

P2P outlaws The Pirate Bay are about to relaunch Suprnova, which was one of the first popular BitTorrent hubs until it was shut down in 2004 in the wake of legal action. Is it big news even for the file-sharing community? Not really – plenty of hubs have sprung up in its wake.

But the decision to relaunch Suprnova seems to be more about blowing a big fat raspberry in the direction of record labels, movie studios and TV broadcasters, who are still trying to squash illegal file-sharing through the courts. How long Suprnova will stay up for this time, though, is anyone’s guess.