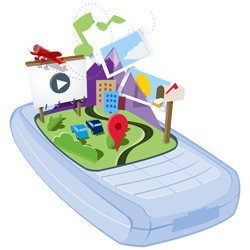 Google appears to have officially scuppered those Gphone rumours, with the announcement of Android, a new open mobile platform to be offered through a body of more than 30 handset manufacturers and operators called the Open Handset Alliance.

The organisation says it’ll focus on “fostering innovation on mobile devices and giving consumers a far better user experience than much of what is available on today’s mobile platforms”, giving developers more freedom to launch cool applications without jumping through technical hoops to get them working across a range of handsets.

The first phones running Android will be available in the second half of 2008, and is described as a “first step”. “Today’s announcement is more ambitious than any single ‘Google Phone’ that the press has been speculating about over the past few weeks,” says Google CEO Eric Schmidt. “Our vision is that the powerful platform we’re unveiling will power thousands of different phone models.”

Google is just one of the 34 founding members of the Open Handset Alliance, so who are the other 33? They’re a split between operators (China Mobile, KDDI, NTT DoCoMo, Sprint, Telecom Italia, Telefonica and T-Mobile), handset manufacturers (HTC, LG, Motorola and Samsung), and other mobile technology / hardware firms (including the likes of Broadcom, Intel, Nvidia, Qualcomm and Texas Instruments).

he companies who aren’t on board are as interesting as those who are. For example, what’s the likelihood of Apple, Nokia, Vodafone, Yahoo and Microsoft joining the Alliance anytime soon? Actually, you can probably answer that…