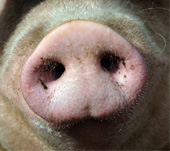 Oink! Oink! One of the largest sources of illegally-downloaded music, OiNK, has been closed down by the pigs, sorry, British and Dutch police. Oink! Ok, I’ll stop now…

Interpol shut it down in the early hours of this morning, after a chap in Middlesbrough was arrested today on counts of conspiracy to defraud and infringement of copywright law, after leaking 60 massive pre-release albums this year to the members-only site. Due to the popularity of the P2P site, us casual downloaders may very well be affected, as within minutes of an unreleased album or song being posted on OiNK, it’s always copied to various other P2P sites around the world. Looks like you’ll have to pay for your legal copy of the new Spice Girls album this Christmas just like everyone else.