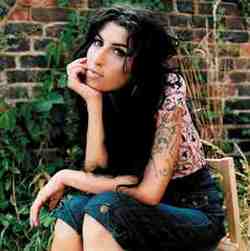 Universal Music Group has announced a huge trial of DRM-free digital music, with plans to sell thousands of tracks and albums without copyright protection from this month, including artists like Amy Winehouse (pictured), Fall Out Boy and Common. But get this: the label has snubbed Apple by not including iTunes in its plans.

Instead, UMG’s DRM-free songs will be sold through a variety of other online music stores, including RealNetworks’ Rhapsody, Wal-Mart, PureTracks, Transworld and – the important one in this list – Amazon’s soon-to-be-launched store. Why no iTunes though? Well, it seems UMG is keen to help break Apple’s dominance of the digital music market.

“We want to have a robust digital marketplace where there’s healthy competition,” a source tells Billboard. “We don’t have that now. Apple has a stranglehold on the whole thing, so much so that all the other online retailers are badly disadvantaged because you can’t buy music from their stores and play it on the iPod. We want to open up the market and create a more level playing field. We want to give other retailers a chance to compete.”