Today is Facebook’s fifth birthday, but will it still be around in five years’ time? There’s a long and a short answer to that question. The short answer is yes. A website, operating at www.facebook.com, will still be going in five years. That, assuming the internet survives the next five years, is a given.

But will it still be the cultural force that it is today – 150 million users worldwide, twice the size of its nearest competitor, leading to academic misconduct, arrests, multiple lawsuits, house-trashings and viruses? I suspect the answer might be no. Click over the jump to find out why.

Facebook makes very little money. That might be fine in more sunny economic climes, but almost every one of Facebook’s attempts to make cash have failed. First there was Beacon. Beacon notified your friends whenever you bought travel or movie tickets, in exchange for cash from advertisers. It failed, because it was clumsily implemented, and people didn’t want to be opted in by default.

Then there was the attempt at microtransactions. For ages there was the option to give ‘gifts’ to other users. Each gift cost a dollar, and a short message could be attached. The problem? There was no actual benefit to having them. 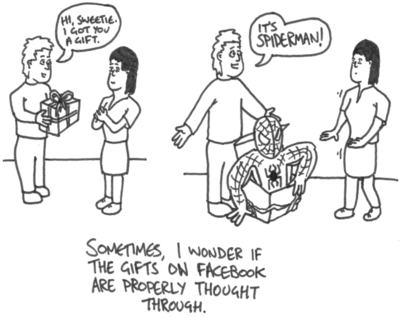 After a while, presumably because they weren’t proving popular, Facebook experimented with getting advertisers to sponsor these gifts and offering them free. This, and a surfeit of ‘free gifts’ applications, only served to devalue the existing gift app, and so the functionality winked out of existence when Facebook redesigned its profiles.

During all of this, Facebook’s been testing out display advertising on its hugely popular news feeds, albeit with plenty of user interaction. The sheer number of pageviews achieved by the site should definitely be proving lucrative. However, the problem with Facebook’s ads is that they have amazingly low clickthrough rates – around 0.04% according to Valleywag.

As a result, they’re worth very little to advertisers. For comparison, MySpace generally gets a clickthrough rate of more like 0.10% – more than twice as much. On top of that, online ad revenues are generally falling. A proliferation of ad space across the web, as well as declining marketing budgets, means that it’s an advertisers playground.

Compounding Facebook’s woes is the fact that most advertisers and marketers don’t *get* Facebook, or social media in general. Look at Mattel’s reaction to Scrabulous, or Warner removing its content from YouTube. Burger King, on the other hand, despite going a little too far, DOES get it – but it’s in sparse company.

So where does that leave Facebook? Without a clear direction. Some think that polls could be the site’s savior – with companies using the site to conduct market research. That’s possible, but they’ll have to tread very carefully on privacy issues, as they’ve discovered in the past.

And what about the new kid on the block, Twitter? Although Twitter doesn’t come close to replicating Facebook’s functionality, I’m slowly discovering that I very rarely need that additional functionality. Nowadays I’m only logging onto Facebook once or twice a day – whereas Twitter is constantly open and running.

Essentially what I’m saying there is that competition for time is more important than direct competition. Because Twitter only does one thing, it’s far more useful to me than all the features that Facebook offers – I get the status updates (which I want – because the social proprioception that it offers is useful to me) without the 20 pictures of someone’s cat. 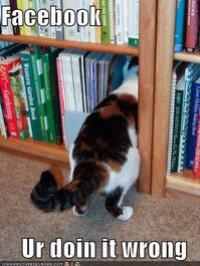 I’ll acknowledge that my usage of the site isn’t like everyone’s – some people love cats – but I suspect that Facebook’s walled garden is slowly going to get overgrown as more open services, which communicate with each other, become the norm.

How can Facebook survive? Tear down those walls. Allow people to get their emails in their Facebook inbox and vice versa. Allow anyone to publish whatever RSS feeds they want in their news feed. Most of all, make it easy for the general public – who don’t necessarily know what IMAP and RSS are – to do things like that.

Facebook’s best hope for survival is to become the web’s OS, and it can’t do that without opening up and letting other sites become a part of its success. To take on Google (which it desperately wants to do), it’ll need some serious funding, but hey – why else would Microsoft have invested so heavily in it?

Facebook will survive five years in some form or other – it has enough momentum to do that. But ten years? Twenty? Unless it makes some drastic changes in the next few years, then it’ll be consigned to the graveyard of social media alongside Friends Reunited, Friendster and Bebo.

Related posts: Facebook is five today. See how it’s evolved | Facebook finds the way to start the cash flowing in – their survey says…