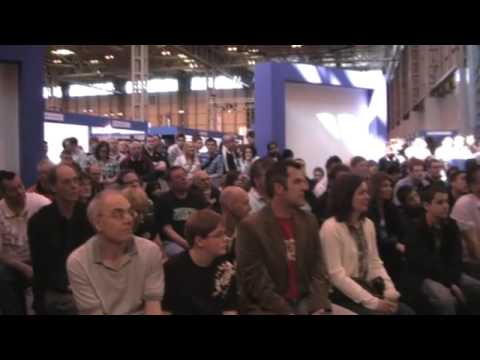 If you’re here, it’s because you’re a cheapskate. That’s the words of free software, services and music guru Duncan Geere and if you couldn’t make it to his talk at the Gadget Show Live, then get yourself a cup of tea, a pen and paper and learn how rule the IT world without paying a penny for the privilege.

More from the Gadget Show Live 2009

Do you like old-skool videogame music and chiptune acts like Pixelh8, Neotericz and Receptors? Then you’ll be pleased as punch about the launch of 8-bit FM, an internet radio station dedicated to the bleepy sounds of days gone by.

Although they’re currently working out some bugs, the plan is for the station to be live 24 hours a day, seven days a week and 365 days a year. There’s a web-based flash player, and you can also listen in Windows Media Player, RealPlayer, Winamp, and iTunes. There’s even a live request system if there’s a particular choon you wanna hear. 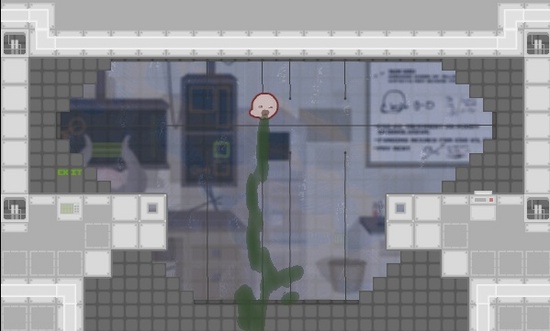 If you’re eating, you might not want to read this. In the flash game I’m about to link you to, you control a little creature that looks a bit like Kirby who uses vomit as a projectile. Chuck up in one direction, and you’ll be propelled in the opposite.

In some cases, you end up in pits that need filling up with puke before you can swim out. Other times, you run out of chunder in your gut and have to ‘fill up’ by eating barf left by someone else before you can continue.

I’m starting to feel a bit queasy, so I’ll leave the rest to you. Play the game online on Newsgrounds here, and direct download it here. 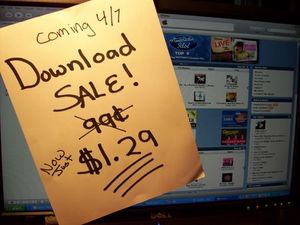 Initial reports from major labels are suggesting that the switch to variable pricing on iTunes has been a failure. According to ‘numerous sources’ sales decreases have been seen across the board since variable pricing was implemented at Macworld back in January.

But lets remember the statisticians’ mantra – correlation is not causation. Just because sales decreases have been seen alongside the implementation of variable pricing, it doesn’t mean that the latter is causing the former.

Just as likely is the effect of services like Spotify on consumers’ music-listening habits. Although the streaming service is unavailable in the States, where these figures are mostly likely from, there are plenty of other similar applications that consumers are beginning to explore.

As people shift from ownership of music to being happy with just access when they need it, sales will decrease. On the flipside, licensing revenues skyrocket, so the same amount of cash is still floating around for music creators – this isn’t the death of the music industry. 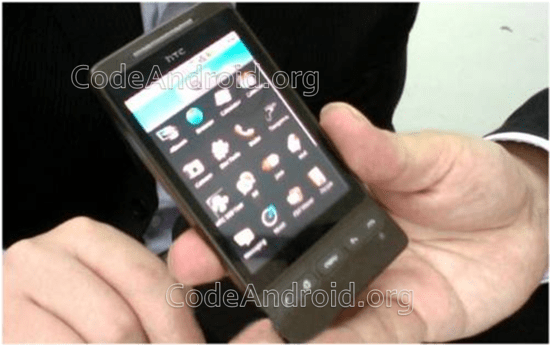 An image has surfaced on the internet, on the ‘Code Android Singapore’ website, of the HTC Hero. This device is a followup to the HTC Magic, and is referred to by many as the G3 because it runs Android – Google’s mobile phone operating system.

It’s a lot squarer than the HTC Magic, and it looks like the infamous chin from the G1 has returned. There’s no trackball, either, which could indicate that G1 users haven’t been overly fond of it as a control mechanism. Also in the shots, though, may be a slot for a 3.5mm headphone jack. That would be a fantastic addition to the handset.

A bit of a kerfuffle has erupted in the community surrounding the forthcoming Star Wars MMO: The Old Republic, after a representative from developer Bioware denied that homosexuality exists in the Star Wars universe.

Community manager Sean Dahlberg closed a thread discussing terminology like “gay,” lesbian,” and “homosexual” in the Star Wars universe with the words: “As I have stated before, these are terms that do not exist in Star Wars. Thread closed.”

It’s incensed the LGBT community that surround the game, who’ve pointed out that not only is that irrelevant to the discussion that was taking place, but that Juhanni, a woman in Knights of the Old Republic (a game also developed by Bioware), had a female lover.

The discussion has reopened in a thread here, which has spanned out to 56 pages, though at the time of writing it seems to have devolved into a flamewar. Homosexuality can be a difficult subject to approach in a videogame, but shutting down all discussion of the topic is deeply offensive, and shouldn’t occur.

If you’re even the newest of Twitter users, you’ll have seen people posting photos of stuff going on around them. In fact, it’s one of the most popular uses of the site and can often scoop real news organisations, like in the case of the plane that crashed into the Hudson river.

This guide will show you a few of the options available to you if you’d like to become a ‘citizen journalist’ too, or maybe if you just spot something remarkable happening and want to share it with your friends.

Twitpic
By far the most popular way of uploading pictures to Twitter is a website called Twitpic. It’s very simple – users can log into their site on their PC or mobile phone and upload images. You can then add a short caption, which gets posted to your Twitter feed alongside a link to the image.

Better still, thanks to Twitpic’s API you’ll find that many third party Twitter clients will come with Twitpic support built in, so you won’t even need to go to the website.

Twitxr
The unpronounceable Twitxr is an application for the iPhone and Windows Mobile handsets that’ll let you upload pictures from your mobile phone, publish them on Twitter and varous other social networking and microblogging sites, and automatically add geotagging data from a GPS unit.

It’s also available as a Java application for Nokia S60 and Motorola handsets, and in a worst case scenario you can visit m.twitxr.com to upload a pic or even just email it, attaching the picture.

People who upload to Flickr from their mobile phones on a regular basis will find this a very easy and convenient way of sharing photos on the site, though if you haven’t got a Flickr account, or a capable mobile phone, then it’s a bit of a hassle to set up.

TweetPhoto
Lastly, TweetPhoto is the new kid on the block for image sharing on Twitter. It keeps all the functionality of its main competitor, TwitPic, but adds more info like who’s recently viewed or favourited a photo.

There’s also a prominent option to retweet photos, which should help the virality of the service. It’ll post your photos to Facebook, too, if you’d like it to. From your phone you can either visit the Tweetphoto website to upload pics, or email them to a unique address.

Conclusions
There’s a multitude of options for you to post pictures to Twitter from your mobile phone, so if you see something exciting on the street then you’ve got no excuse not to post it. Let’s not have 80 pictures of your cat, though, yeah?

If you have any incredible shots that you’d like to share with us, then now that you know how to upload them to Twitter, send them our way at @techdigest. 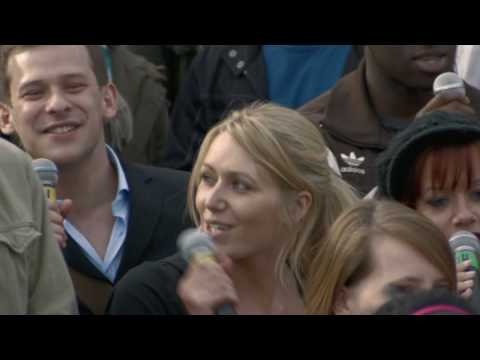 Last night, in central London, 18,000 Londoners gathered to belt out karaoke hits in Trafalgar Square in the latest T-Mobile advertising stunt. The crowds convened at 6pm, and massive queues snaked into the central area. Pop star Pink showed up, too, and you can see in the video above.

After a couple of warm-up tracks, former T4 host Vernon Kaye led the crowd through several rock hits including “Hey Jude” and “Is This The Way to Amarillo?”. The staff at the nearby Texas Embassy confirmed to me that no, this wasn’t the way to Amarillo.

The Karaoke session follows a mass dance-off that took place in Liverpool Street Station in January and was subsequently used in adverts for the company. If you attended the karaoke fun last night, then don’t be surprised if your rendition of “Total Eclipse of the Heart” ends up soundtracking the company’ latest handsets. 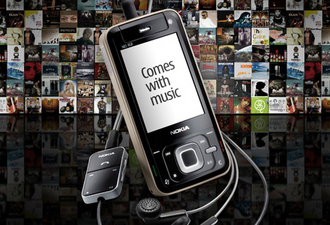 Despite strong criticism coming its way from all corners of the internet, including ours, Nokia is standing shoulder to shoulder with Comes With Music. The company claims that it’s happy with the way the public has responded to the service, and cautions commenters to look at the global picture.

As Dan pointed out the other day, the service is doing very well in Singapore and other parts of the far East. It’s apaprently never been Nokia’s strategy to push it very strongly in the UK. That hasn’t stopped the media jumping on it with blood in their eyes, though.

In a wonderful display of bad timing, too, Nokia is launching Comes with Music in Mexico today. I imagine most news coverage is focusing on other matters. Mexicans will be able to pick up the Nokia 5800, though maybe not the Star Trek edition, from Nokia’s online store. 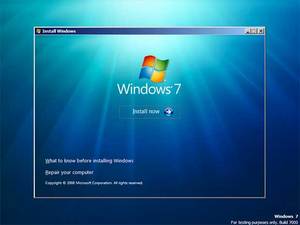 “23rd October is the date the Windows 7 will be available” says Bobby Watkins, Acer’s UK MD. The company will be releasing its all-in-one Z5600 PC on that date, and it will come pre-loaded with Windows 7.

Microsoft is still claiming a release date of January 2010, but the company has acknowledged that it’s running ahead of schedule on the follow-up to its poorly-received Vista. Any Vista-based PCs purchased within 30 days prior to 23rd October will be eligible for a free upgrade.

Stay tuned for more news on Acer’s 2009 lineup. We’ll have the full details for you shortly.