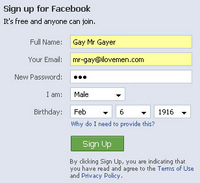 Mathew Firsht has won a sensational and trend-setting court case today, against a friend who set up a fake Facebook profile with loads of personal details – and sex-based lies – about Mathew’s life.

The former friend, cameraman Grant Raphael, also set up a Facebook group called “Has Mathew Firsht lied to you?” – a group which stayed online for 16 days until Mathew’s brother found it and alerted whoever it is you alert when this sort of thing happens (your mum?).

The ruling found that the profile “defamed” Mathew’s company by suggesting it owed people money and had lied in order get out of paying it. The fake profile also, rather predictably for a fake profile, was said to have “falsely indicated his sexual orientation” as well.

If I had £22,000 for every time someone falsely indicated my sexual orientation on the internet I’d be a very happy man, and probably the proud new owner of Saddam’s Love Wagon.