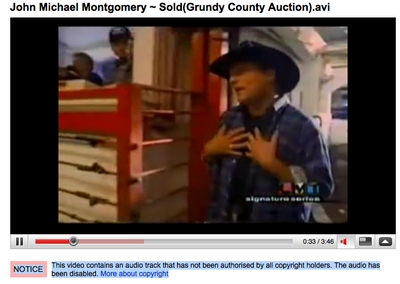 In a strange, sudden and unannounced move, YouTube has suddenly muted a bunch of videos that it claims have ‘unauthorized copyrighted music’. Under the video, it says “This video contains an audio track that has not been authorised by all copyright holders. The audio has been disabled.”

Two things bother me about this. Firstly, the users are going to absolutely detest it. They’ll leave in their droves for YouTube’s competitors. I don’t understand why YouTube would agree to something as ridiculous as this – they’re not stupid, and I’m sure they realize what the effects will be.

Secondly, how does this square with the deals YouTube made two years ago, when labels made their content “available for inclusion in sanctioned consumer uploads”. This move seems to run 180 degrees in the reverse to what those deals aimed to facilitate. I’ll be keeping an eye on this one, and update the post when I hear more and/or YouTube releases some sort of official statement.

UPDATE: YouTube has posted on its official blog, claiming that it made the move because it thought its users would rather have a muted video than no video at all. Sigh – that’s not really the issue here, is it?