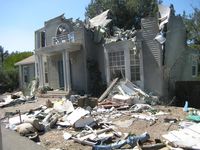 Marauding Facebook fiends trashed a £1m luxury house in Brighton over the weekend as they gatecrashed a sweet 16 birthday party.

Georgina Hobday’s 100 person guest list swelled to a riotous throng of 300 after her parents left their Seven Dials address in East Sussex when the details of the bash were posted on the world’s largest social network.

Michael and Sylvia Hobday thought all was fine back at their four-storey town house until they received a call from the police saying that their daughter’s shindig had gone wild.

“It was an absolute horror show,” said Mr Hobday. “I will never have a party for my daughter here again. She had no idea who most of the people were and they were rampaging through the house. The garden has been ruined, the grass is mud, people were walking through the pond and I heard one boy was trying to headbutt the mirror.” We’ve all been there.

“Some people were climbing up the balcony and trying to get through the windows. My floor was blackened with dirt and there were cigarette burn marks around the bottom of the door.”

That actually sounds like a fairly normal teen party to me. Don’t tell my unborn children this but I’d be disappointed if they didn’t torch the odd piece of furnishing that I don’t as yet own – provided I’m allowed to pretend to be angry and they feel suitably guilty. But I digress…

“When I left the house, there was no alcohol in the house but when I came back there were beer cans and vodka bottles everywhere.”

What the hell did he expect? What kind of loser does he think his daughter is?

“I think Facebook is a major cause, as well as texting.”

Yes, well obviously we should ban both. Gatecrashings never occurred before Facebook existed, and as for texting, well, I’ve had my eye on that one for a while.

His next point is rather genius use of party finding tech though. Check this…

“I heard that a Bluetooth alert was going round saying ‘hot party close to the Seven Dials’.” Now, that sounds excellent.

The most pathetic part of this whole is tale is the quote “We eventually got the unwanted guests out at about 11pm”. 11pm? 11pm? What kind of party finishes at 11pm? These parents need to unclench. The girl’s 16! Let go.

Anyway, enough said. Remind of this one when I’ve got children.