$150 for a pair of earphones is very expensive. For some, it may be even more than their MP3 player is worth, so it’s certainly a big purchase. The quality of Sony earphones is undoubted, however, and the Sony DR-BT140QP earphones have one big difference from most others.

There’s something quite attractive about wireless earphones. No-one really needs them – a wire going between your ear and your pocket isn’t a particular inconvenience, but to go without it would be a nice luxury. You could turn your head sharply without one falling out, you could reach for something in your pocket without accidentally pulling the lead out, and missing that one bit of the song you really like. Actually, you could even put your MP3 player in your bag, while continuing to listen. The Bluetooth range is 10m, so there are surely exciting possibilites I’ve yet to imagine.

One of the three themes of the Beijing Olympics is to make it a “High-tech Olympics.” But how will this benefit the viewing public? Here are the top ten innovations that will improve coverage.

1. HD coverage
For the first time, the Olympics will be available in HD. In fact, the entire event is being produced in HD, although obviously you will only get the full effect of this if you have an HD-ready TV. Visit this page if you’re still unsure about HDTV, or if you’re looking to enter the HD world in time for the Olympics, check out this rather neat HANNSpree 19-inch HDTV, which is perfect as a smart TV for the bedroom – after all, the time difference means that some events will be on whilst you would usually be tucked up in bed… 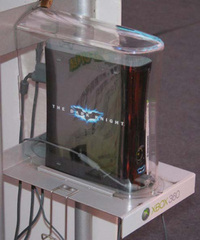 It was only a matter of time before this happened – someone customised the Xbox 360 for nerds dedicated Batman fans. Really, it does exactly what it says in the tin – it’s an Xbox 360 with The Dark Knight logo on the front. Like many products altered to take in a band, brand or film, it looks quite good, but you’d have to be slightly too much of a fan to shell out the extra money.

This customisation, though, doesn’t really make sense. Because, for the first time in the history of the Batman series, there isn’t actually a video game in line with the new film. So to customise a games console with the name of a film seems rather pointless. It would be like customising a DVD player with a Grand Theft Auto logo…you might be a big GTA fan around, but you wouldn’t go plastering its logo over your entire personal possessions regardless of their purpose. What next, Girls Aloud logos on your cooker? Starbucks logos on your curtains? This really wasn’t thought through at all. 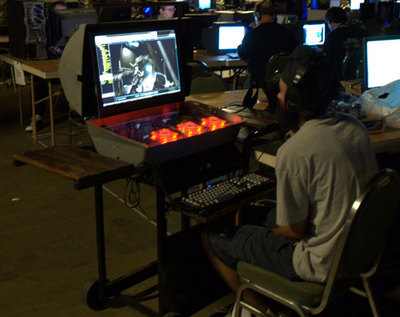 As you can probably tell from the picture, this rather odd computer is made out of a barbecue. There doesn’t appear to be a great deal of point to the venture – the barbecue no longer functions in the traditional manner, so it’s not like the user can play GTA whilst attending to the sausages. That would actually be a rather useful device – hardcore gamers probably miss out on hundreds of meals a year whilst halfway through a game, so it would be rather useful if they could ‘game and grill’ simultaneously… 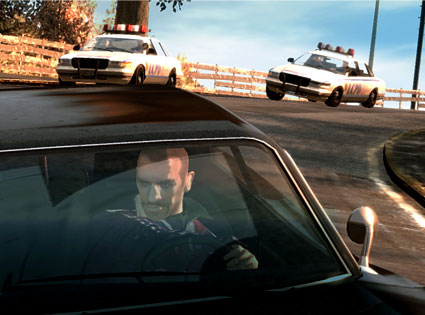 The (rumoured) first details of the eagerly-awaited Nintendo DS version of Grand Theft Auto: Chinatown Wars have been leaked on an internet site…only to be removed shortly afterwards…

The Zeemote JS1 will come bundled with Sony’s W760i phone, pre-loaded with two games, and a further 16 will be available to download from the Sony website. Since the two basic games, however, are both all-time classics in Tomb Raider and Sonic the Hedgehog, most users shouldn’t need to venture into the additional games too much to satisfy their gaming needs. 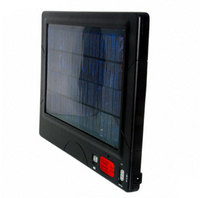 This environmentally-friendly laptop charger means the end for your battery letting you down whilst working outside. In fact, to call it a ‘laptop charger’ does it a disservice, since it can also be used to charge pretty much anything, from your iPod to your mobile, with the use of the correct adaptor.

It appears reasonably large, which might rather put you off lugging it round merely to charge your iPod, but if there’s any reason you and your laptop need to be outside for a considerable length of time, this charger could well come in handy. 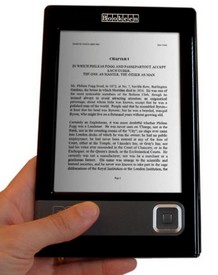 The Bookeen CyBook Gen3 is being described as the thinnet and lightest epaper reading device around. It’s able to store 1000 books, which seems more than enough, but for any exceptionally well-read users, the simple addition of a 2GB memory card allows you to store 10,000, meaning you have a mini-library in your back pocket.

It is able to display PRC, txt, HTML and PDF book formats, and since it copes with JPG, GIF, PNG and MP3 formats as well, it can accurately be described as a rather lightweight multimedia device. 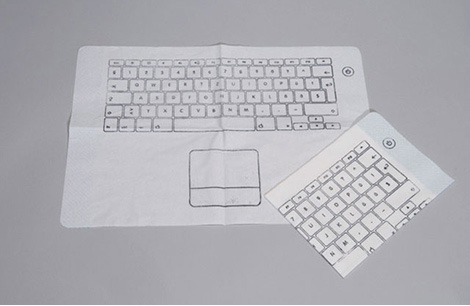 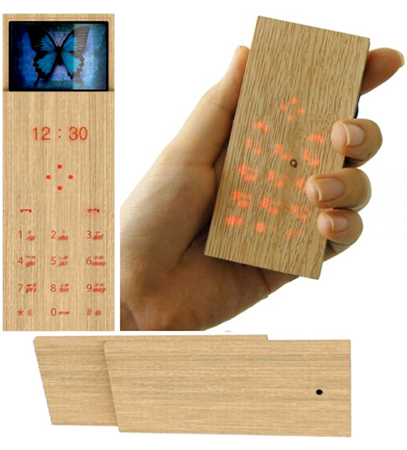 This rather unusual phone, made from African Blackwood, is the brainchild of Hyun Jin Yoon and Eun Hak Lee. Whilst some bizarrely-designed phones are slightly behind the times, in terms of its functions, the Maple Phone is advanced enough to offer a camera and an MP3 player built in.