One of the three themes of the Beijing Olympics is to make it a “High-tech Olympics.” But how will this benefit the viewing public? Michael Cox outlines the top ten innovations that will improve coverage. 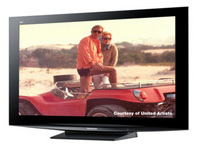 1. HD coverage
For the first time, the Olympics will be available in HD. In fact, the entire event is being produced in HD, although obviously you will only get the full effect of this if you have an HD-ready TV. Visit this page if you’re still unsure about HDTV, or if you’re looking to enter the HD world in time for the Olympics, check out this rather neat HANNSpree 19-inch HDTV, which is perfect as a smart TV for the bedroom – after all, the time difference means that some events will be on whilst you would usually be tucked up in bed.

2. Even better HD coverage?
If you have an appropriate satellite system, British Eurosport will cover the Olympics, and as Sky are keen to point out, they’ll do it in HD too, and claim their HD service will be better than the BBC’s. Whilst often covering the same events as the BBC do, its underrated coverage often features commentators more knowledgeable about minority events than the BBC’s team – after all, Eurosport’s commentators are used to covering events of the calibre of cross-country skiing and handball, so they’re probably more versatile.

3. Online viewing
It’s incredible to think that at the time of the last Olympics, back in 2004, YouTube hadn’t even been established, first appearing on the web a year later. Last week, the International Olympic Committee struck a deal with YouTube to stream three hours of television coverage a day on the site, despite YouTube not being an official media partner. Unfortunately, this is only available in the Middle East, Africa and Asia – the rest of us get a ‘this channel is not available in your country’ message – not even a ‘sorry’. Still, UK and US viewers shouldn’t find this too much of a drawback, since the BBC and NBC will be streaming coverage on their own websites, and for significantly longer than three hours a day.

4. Interactive coverage
The BBC is dramatically ramping-up its coverage for the 2008 Olympics. Even the BBC’s top technology gurus have been amazed at quite how popular BBC interactive has been during sporting events, and the Beijing games will be by far the corporation’s most extensive interactive offering. For the first time, there will be three bonus streams on freeview (adding to coverage on at least one terrestrial channel), meaning that the BBC will broadcast between 2,500 and 3,000 hours of Olympic coverage – up from just 1,000 during Athens 2004. You’ll also be able to catch up using the BBC’s iPlayer, which has grown massively in recent months, and may experience another boom over the next seventeen days.

5. Comprehensive mobile updates
Google mobile has launched a comprehensive mobile internet service, meaning any relevant searches from mobile devices will display information straight away. It’s explained in great detail here. It looks as though comprehensive updates will be easily accessible, even for those of us not fortunate enough to have an iPhone, since getting sports updates via regular WAP phones can be tricky.

6. Weather control?
Whilst the climate in China seems less likely to ruin the Olympics than the regular downpours ruin Wimbledon, officials are nevertheless highly concerned about rain delaying proceedings. They have, as you might expect, come up with a state-of-the-art weather predictor – and have purchased one of the world’s top ten supercomputers from IBM, to enable the system to run successfully. What you might not expect is that there is a possibility the Chinese could attempt to control the weather itself. Any storms could result in officials using cloud seeding, a system where seeds are fired into the clouds to provoke early rainfall, resulting in clear skies over the Bird’s Nest.

7. Realistic 3D views
To give a greater impression of what it’s like to be at the Olympics in Beijing, Google has developed Google Earth in order to show all the stadiums and arenas in 3D. To save you zooming in and out yourself, check out the official stadium ‘videos’ google have put on youtube.

8. Better information
Of course, in an event with such a large number of events, a major corporation such as the BBC will struggle to get an absolute expert commentator on every single sport. Whilst the impeccable Barry Davies will demonstrate his superb knowledge across a wide range of events, other less versatile commentators will be able to rely on, for the first time, the Commentator Information System (CIS). Already used at other top sporting events including Wimbledon, the CIS is a touch-screen system displaying a constant stream of news, statistics and medal rules. The 2,000 screens will also display rules and regulations, so if there’s a controversial decision in the sychronised diving semi-final, the commentator will be well aware of what’s going on.

9. Faster internet
A common complaint from media outlets at the last Olympics was the poor internet service, with many not having wireless or broadband, let alone wireless broadband. This has been improved, with media outlets having access to amongst the fastest net connections in the world. Whether this will have a noticeable benefit for the British public remains to be seen.

10. Extravagant internet features
There’s a plethora of internet sites dedicated to giving you the fastest and most comprehensive Olympic coverage imaginable. Amongst the best features are this map from google, which displays medals won by each country, by placing them on a world map. You can sort the medals by which event they’ve been won in, too, so you can check out how many long-distance medals didn’t go to African runners.