One of the perpetual problems of relationships occurs when the couple has to get up at different times. (As a writer, I know this problem well since I never have to get up, ever, so any time anybody wants to get up is at odds with my schedule.) Designer Meng Fandi has come up with a possible solution. The Ring Alarm has two vibrating rings and a computerized charging cradle. The cradle is used to program each ring to vibrate at a certain time. Voila: a buzz for him, and a buzz for her. (Or him and him or her and her; it’s not prejudiced.) A more detailed diagram of this follows the jump. [GT]

Related posts:
USB is taking over the world: now we have the Nandemo microscope
Stem cell patent fray lumbers forth
Electronic wave hypersensitivity in Japan 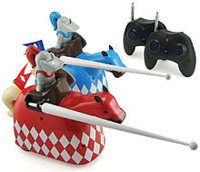 Now you can have all the thrills of a Renaissance Fair right in your home (without the insane cover charge, drunken louts, “prithee”ing or the Renaissance-grade body odour) with the remote control jousting knights from ThinkGeek. Each set includes 2 R/C Horses (one 27MHz and one 40 MHz) with knock-offable knights and lances. Once you unseat your opponent’s knight from his steed, their control over their horse stops. Uses 8AA batteries (2 per horse and 2 per remote) – included! Video of the noble knights in action, and fighting a fearsome dragon, after the jump. $39.99 [GT] 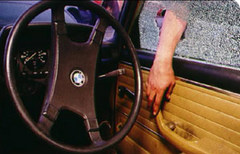 Newsflash: even if your vehicle has a built-in immobilizer to prevent theft by hotwiring, you still have to protect the key. “Vehicles are being stolen through residential break and enters, where the suspect[s] enter the home and obtain the keys for the vehicle,” according to police in Toronto, Canada. Logically, you should lock your keys in a safe, and swallow the key to that. Then take the tube. [GT]

“To understand the concept of digital water, imagine something like an inkjet printer on a large scale, which controls droplets of falling water,” said Carlo Ratti, head of the MIT’s Senseable City Laboratory. This is the principle behind the Digital Water Pavilion, a structure designed for Expo 2008 in Zaragoza, Spain. Thousands of water jets will be programmed to show images or text, but made of simply a thin film of water which can be easily walked through. “The entire surface becomes a one-bit-deep digital display that continuously scrolls downward.” Hard to picture? Check out the video at DigitalWaterPavilion.com. [GT]

Walls you can walk through 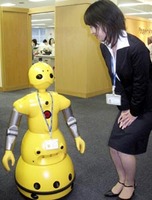 The job market being as volatile as it is, even robots are having to take temp jobs to make ends meet. Mitsubishi made its Wakamaru receptionist robot available for hire last month and PeopleStaff, a major temporary staffing agency based in Nagoya, has accepted 10 of them which will be sent out to work in the Tokai area of central Japan. According to Wakamaru’s resume, it can recognize faces, carry on simple conversations with a vocabulary of 10,000 words, and perform simple manual tasks. Under “Special Skills”, Wakamaru points out that it is “adept at thanking visitors for waiting and can sing songs as it shows the visitors to their destination within the building”. As for salary, Wakamaru is asking for 120,000 yen ($1,000) per day for short-term gigs, but is willing to accept 3 million yen ($25,000) for one year, which is about as much as a human temp worker gets. And like most temp workers, Wakamaru will probably spend all its time on coffee breaks and surfing itself. [GT] 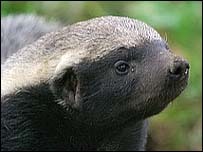 British forces have denied that they have, or at least have used, any technology required to release a plague of ferocious, man-eating badgers on the Iraqi city of Basra. Repeat: no British man-eating badger technology being used on natives of Basra. No word on whether mushroom mushrooms or snake, snakes, are in action. (Video after the jump.) [GT] 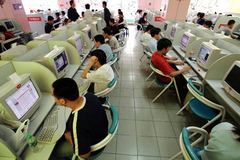 Zhang Zhengrong oversees the Shanghai hotline for pregnant teenage girls, and says almost half of the 20,000 callers met their beaux over the Internet. Therefore, the Internet is responsible! “Most of the fathers disappeared after learning about the pregnancy, and some of the mothers did not even know the fathers’ names,” the China Daily said. Also, that never happened before the Internet! The “the Internet is to blame” idea seems mostly to have come from that a survey by Zhang’s hospital showed fewer than 8% of parents spoke to their children about sex, and almost 80% of young people learned about sex from the Internet. So if there’s an upswing in the number of Chinese midgets spanking men covered in Thousand Island dressing, we’ll know… they’re reading South Park transcripts over the Internet. [GT]

Once again, a valiant Englishman is about to do what no one has ever done before — but this time it’s not so much “because it’s there” (as Mallory said about Everest) but rather “because it’s not there anymore.” British adventurer Lewis Gordon Pugh is planning to swim one kilometer to the Geographic North Pole in temperatures of minus 1.8 C (28.7 F) wearing only Speedo trunks, a cap and goggles. He will be swimming in waters created by melted sea ice, and hopes to draw attention to the damage climate change is doing to the world’s most vulnerable ecosystems. He has said, “”Just five or 10 years ago this swim would never have been possible. “It’s deeply regrettable that it’s possible now because of the devastating effects of climate change,” said Pugh. The swim, known as the Investec North Pole Challenge, will take place on Sunday, July 15 and will take around 21 minutes to complete. If he is successful, Pugh will break his own record which he set in 2005 off Antarctica when he swam in temperatures of 0C. [GT]

Campaigner off to swim in geographic north pole (via Ecogeek)

Not just an assistant to a failing arm, the Myomo e100 actually helps retrain around brain damage. Developed to help stroke victims, using the e100 reinforces new neurological pathways and helps neurons reconnect. “This is an area that’s exploding,” said Hermano Igo Krebs of MIT. “There are now a hundred groups around the world working on this. In 5 to 10 years, I expect we’ll see these kinds of devices in all major clinics and rehab hospitals in the developed world, and even in patients’ homes.” [GT] 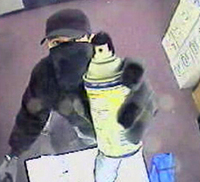 Rule #1 of committing a crime: do your research first — or have Google handy. Two burglars broke into an indoor amusement center in Colorado Springs, Colorado, where, first, they tried to disable a security camera by spraying it with WD-40 (which is apparently a great glass cleaner). They then spent 70 minutes trying to get into three safes, despite the fact that they appeared to have the combinations. Finally, they had a brilliant idea and used an office computer to Google for “how to open a safe” and “how to crack a safe”. They were then able to easily open the safes — and abscond with $12,000. “They’re not professional safe people,” said Colorado Springs police detective Chuck Ackerman. Indeed! [GT]