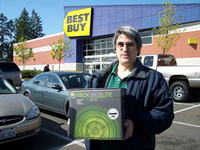 That’s a saving of £30 over the newer, cheaper RRP of £129 that only took effect in September, a saving which Dan’s girlfriend could then put toward buying Dan a copy of GTA IV to go with it. Dan’s girlfriend would then be left in peace to watch EastEnders while Dan spends hours creating a Dan-like Avatar on Christmas Day.

The Zavvi Xbox 360 madness sale has also seen the price of the regular machine with its 60GB hard drive slashed from £169 to £149, with the price of the Elite CRASHING by £30 to £199. Zavvi has also reduced the price of a PS3 by £30 – leaving it still shamefully out of reach of mainstream gamers at a lofty £269. All deals are only available in-store, sadly.

Plus no one’s yet confirmed if the Xbox 360 Arcades are the new fabled “Jasper” hardware rehashes with the 256MB of on-board memory that were spotted in the wild recently – you’ll need to examine the box and see if you’re getting the newer, lower-consumption 150Watt PSU to be sure.

Related posts: The Xbox 360 DEATH CHAMBER | Kids are mad for a bit of it