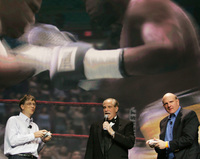 A poll conducted by impenetrable-if-you’re-over-20 online cyber-fortress Habbo has found that games consoles are this year’s hottest-to-have Christmas present, beating mobiles, MP3 players and even wooden train sets, with 39% of the 4,500 kids polled demanding a games machine or PC off mum and dad this year.

Incredibly, Microsoft’s machine beat Nintendo’s fashionable Wii for once, with 20% of the game-wanting Habbo youths asking for an Xbox 360 – and only 19% plumping for a Wii. Probably because most of them got one last year. As ever, Sony’s PS3 is LAST – 15% are asking for one of those off poor Santa…

It could be because the kids of today realise their parents haven’t got any money left due to Iceland burning it all to keep warm, so are lowering their budget expectations by asking for the cheapest option to ensure gift-getting success.

Xbox 360’s price has been slashed to a staggeringly cheap £129 or a bit less this year, while Wii remains at or even above its launch RRP of £179 and can still only be bought in shameful retailer-enforced bundles due to stock problems, jacking the price up further still.