Last night Microsoft kicked off proceedings at this year’s E3 video games conference. News of hardware price cuts and the launch of a new model preceded the event, but Microsoft still had a few surprises to share, including a new deal that will make Netflix movies and TV shows accessible directly from Xbox 360 consoles.

Users who have both Xbox Live Gold membership and a Netflix membership will get to browse through the 10,000 strong Netflix online library. Currently, that’s not the full selection that Netflix’s disc rental service has to offer, but more are being added all the time and it’s a worthy addition to Microsoft’s own extensive rental selection, already being sold through Xbox Live Video Marketplace.

“There is no better way to deliver entertainment to your living room”, said Don Mattrick, senior vice president of Microsoft’s video game business.

Crucially, this is a major blow to Sony, whose own online movie retail service for its rival console, PlayStation 3, is still in the planning stages. However, that doesn’t make a lot of difference to users in the UK and the rest of Europe, who are still faced with a relatively sparse selection of video content on Xbox Live Marketplace and, of course, no Netflix.

For now, this news is only of benefit to players in North America, but with the competition heating up, with a bit of luck this may spark a video arms race between the two warring manufacturers in other regions. Certainly no bad thing for us consumers. 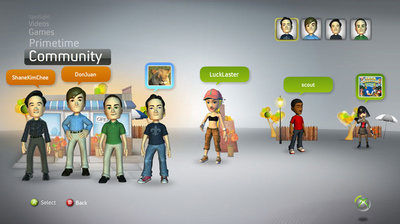 Other Microsoft announcements from E3 included the unveiling of a new Final Fantasy title, FFXIII, and a new look Xbox Live.

The redesigned service will soon sport a fresh layout and colourful avatars that players can use to interact with their friends in a community channel. Awww, how cute. Instead of a faceless list of your friends’ leet names, you’ll get to actually see them in the form of their keeerazy avatars, which look very much like tarted up Wii characters.

That sound you hear is millions of Call of Duty 4 players being noisily sick into a bucket as their dignity is bargained away so that Microsoft can desperately snatch at the so-called casual market.

For more Xbox 360 news, check out our sister blog Xboxer.tv