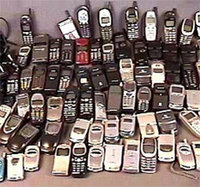 If there was ever a reason to go to GameCityThree, rather than the London Games Festival, then this is it. A Carphone Warehouse “Mobile Life” report reckons that 25% of adults in London have had their phone nicked, compared to 15% in the rest of the country. 14% of British teenagers have had their phone stolen, compared to 9% of teens in the USA, and 7% of adults. In London in 2007, there were three robberies per 1000 people, whereas in New York, there were only 1.61.

Why’s that then? Well, it turns out that we Brits prefer fancier phones. In London, again in 2007, 36% of adults had a phone with a camera and MP3 player built in, compared to 17% of adults in New York. I imagine both those figures have skyrocketed since, however, because it’s almost impossible these days to find phones that *don’t* have a camera and MP3 player of some sort.

How can you avoid being a victim? Well, don’t flash your phone around, so thieves can’t see that shiny Karl Zeiss lens. Sign up to a service like Immobilise, so that if your phone does get stolen, it’s traceable. Oh, and get some insurance. It’s only a fiver or so a month, and saves you forking out several hundred quid every time you leave it in the back of a taxi.