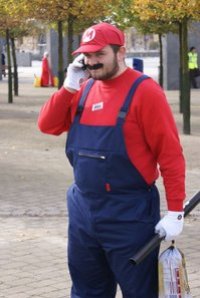 If you’re a gamer in the UK, you might be aware that it’s currently the London Games Festival, a celebration of all aspects of video games and gaming. It’s been going on since last Friday, and it continues until Nov 7th. Here’s a brief roundup of what’s been going on, and what’s planned for the next few weeks: 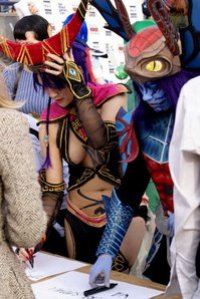 On Saturday, two world records were attempted. The first was for the largest gathering of cosplayers – people who dress up as videogame characters. Last year, a record was set at 88, but since then the Germans have overtaken us with a record of 337. Triumphantly, however, we retook the crown on Saturday with 342 people dressed up as videogame characters, including the chap pictured above and the ladies to the left. Tonnes more pictures can be found here.

A record attempt followed for the most amount of people playing DS in one place. The current record is held by Australians, 381 of em. Sadly, this didn’t go as well, and only 135 or so attended (if you know the exact number, please let us know in the comments!) but much fun was had by all, playing 8-player games of Bomberman and Mario Kart. The attempt was co-ordinated by DS:London, a group of people who meet up regularly in London Pubs to play DS.

Tomorrow and Wednesday, the Eurogamer Expo will be taking over the Old Truman Brewery in Brick Lane. They’ll be showing off some of the newest games, including Mirror’s Edge, LittleBigPlanet and Tomb Raider: Underworld. I’ll be popping down to see whether any of them are any good – look at the list here and let me know if there are any in particular that you’d like me to check out. Or come down yourself, of course.

On Thursday night, the ridiculously talented Jonathan Coulton will be playing at Shepherd’s Bush Empire. He’s the man behind the epic “Still Alive” from Portal. He’ll be sharing his geeky folk rock with Britain.

On Friday and Saturday, “Be the One” hits Trafalgar Square, promising new games from EA. Go along with your DRM protest banners, then. It’s also going to feature a massive construction built over the square, so be prepared to queue to get in and out. They’ll be premiering Red Alert 3, amongst other titles.

The same night, the Golden Joystick awards will be taking place at the Hilton on Park Lane. These gaming awards are in their 26th year of running, and celebrate the brightest and best of the gaming world. My money’s on GTA IV, Rock Band, Halo 3, Bioshock, and Spore.

Phew. That’s just a few of the things that are on – specifically the things I’m hoping to make it down to. There’s absolutely tonnes more – the full listing is here. If that wasn’t enough, there’s also a fringe festival going on at the same time. Details of that can be found here.

If you’re going to any of the events, or you’ve been to any so far, then let us know in the comments below. Admit it… you were the one in the “Toad” costume, weren’t you?