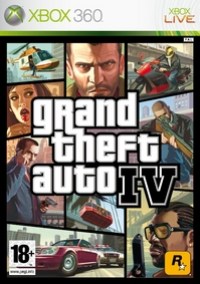 At midnight last night, game stores across the country opened for launch of Grand Theft Auto IV. You may not have heard of it – it’s an understated affair from a little known developer. It certainly isn’t the kind of game where every single newly unearthed feature is granted its own headline. And Rockstar definitely doesn’t like carefully building hype for its games to a deafening crescendo right before launch. Oh no.

Last night I took a long pilgrimage (20 minutes, number 31 bus) to the centre of Rockstar North’s home town of Edinburgh to see how the buzz had impacted on the city at the creative heart of the GTA franchise. Naturally the Scottish crowds were out in their thousands champion their very own home-grown conquerors of the video game world.

Okay, I’ll cut the bullshit. It was actually a strangely muted affair. I arrived at the Princes Street Gamestation at around half eleven. The staff had opened the store up already and there was a short queue out of the door. Pretty soon a rumour travelled up the line that the shop staff were checking IDs. The line of people then dissolved into a grumbling mob of departing children and left me clear to join other fifteen or so people inside the shop.

This was a pretty stark contrast to the GTA: San Andreas launch which I attended just up the road at GAME nearly four years ago. That took over an hour and a half to get through even though I was about half way up. I did notice that other game stores had their own queues last night, but nothing on the same scale as before.

The most noticeable difference was the number of kids trying to sneak a copy this year. After we had all stood about looking at our watches waiting for midnight to bloody well hurry up so we could get on with it, another couple of under 18s were rooted out as they finally reached the tills.

I doubt this will have any impact on the game launch – far from it – but the lack of crowds and the number of kids seemed noteworthy. It was really a shame that there wasn’t more buzz on the streets of Rockstar’s North’s home. The reported shortage of copies in the UK following massive pre-orders didn’t seem in much evidence either.

As for the game itself; I sunk in a few hours last night and so far, yes, it is everything that we always hoped it would be. However, while the series has courted controversy over shocking amount of freedom you had to direct your actions, namely into violent assaults on as many hookers as you could find, the new one just seems less, well, shocking than it used to. Instead it has become par for the course and the maturity and attention to detail in all other aspects of the game reveal that Rockstar has been looking at a far bigger picture for much longer than its critics care to realise.

One thought on “Grand Theft Auto IV launches across the globe, draws few crowds in its home town”