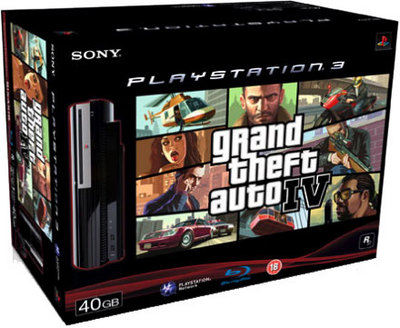 In the UK, Microsoft is doing its damndest to make sure that the buying public remains blissfully unaware of any automobile theft on any kind of scale, grand or otherwise, on anything except the Xbox 360. Sony hasn’t really done a lot to dispel the myth – in the face of a Microsoft funded GTA IV adverts, Live points promotions and exclusive content deals, it has remained stony faced as if wondering what all the fuss is about.

But it has at last conceded that there might be something to the whole Grand Theft Auto IV thing and has officially announced a new PS3-GTA IV bundle SKU, which by the virtue of having vaguely attractive packaging, may ensure that some PS3’s will be vacating shelves come April 29th.

Even the price is nothing particularly special at £319.99 – with a bit of careful shopping you could probably get the Gran Turismo PS3 bundle AND GTA IV separately for less than a tenner more.

They should be good for impulse purchases once the GTA IV reaches a frenzy next Monday night and Tuesday, but if you can possibly resist the lure of GTA IV for a couple of days, I expect you’ll be able to find these bundles at something more reasonable like £300 in pretty short order.