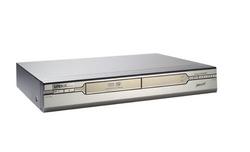 I don’t know exactly how Lite-On’s business plan reads, but I imagine it goes something like this: ‘See what’s on the market, improve the features, boost the specs and then slash the price just for good measure’. Topping Lite-On’s range of HDD/DVD recorder combo’s is the LVW-5055. It offers a massive 250GB of storage space on its internal Hard Disc drive and a DVD recorder with support for DVD+R(W) and DVD-R(W), and CD-R(W), as well as the more exciting dual-layer DVD+R format.

Underneath the front panel you have the DV, S-Video and composite inputs, and on rear you’ll find a Scart input, as well as Scart, composite and component outputs. It is multi-region, progressive-scan and compatible with DivX format video. But perhaps its best feature is that you can pick one up for somewhere between the £200-£250 mark. So how well does it work? Find out on the turn.

Although the menu system isn’t the most sophisticated looking affair, menu navigation, and thus programming, is incredibly straight forward. There are two main control buttons found on the centre of the remote entitled Guider and Contents. Guider takes you through a very straightforward step-by-step menu system allowing you to start recording to either storage device, or perform actions such as copying from one source to the other, erasing content or maintenance tasks. The Contents button then lets you navigate through your recorded content and anything else you happen to have saved on the device such as MP3 and WMA music or DivX video.

Like most other competing recorders, the LVW-5055 lets you record in a variety of qualities – there are 5 to choose between – to conserve space if necessary. Low Quality gives you something like 330 recordable hours on the hard disc. Obviously, it isn’t that great to look at, but it is still perfectly usable for things like daytime Aussie soaps.

High Quality is great and well up to the standards set by other big name brands. It is a bit space intensive though, so you can only expect to get an hour’s worth of video on to a single layer DVD. However, because the LVW-5055 supports the DVD+R dual layer format, you still have a practical solution for archiving feature length programs and films.

The only things letting this recorder down are just those that you’d really only demand from a more expensive system. Most obviously an integrated digital tuner would have been a welcome addition, especially now that the analogue switch off doesn’t seem all that far away. On the other hand, if you’ve already bought a digital tuner, or have a telly with one integrated, you’re covered anyway.

Other niggles include a pretty slow start-up time from standby and a post-recording editing mechanism that is a bit primitive – but by no means unusable. A few of the buttons on the remote have some less than obvious functions and a bit of a strange positioning; for example ‘Timeshift’ is the function for pausing live TV and actually quite handy, but for some reason it is tucked away at the bottom.

DVD playback, and the range of playback functions wasn’t that great either – its basically like an ordinary cheap player. But like the digital tuner, it is likely that many people will already have a standalone DVD player. Plus, because you can’t do things like watch a DVD and record to the HDD at the same time, you might better off keeping an existing player in place anyway.

The most worrying issue I noticed is that the DVD drive can tend to make an annoying high pitched whine when operating. However, the review unit I have in front of has obviously been doing the rounds for a while and has undoubtedly had more than its fair share of knocks and scrapes. I haven’t tracked down any other similar complaints in my research, but it might still be worth checking out before you part with your cash.

Lite-On’s low cost recorder goes above and beyond the call of duty – the competitive recording quality, easy to use menus and generous feature list, coupled with a very reasonable price tag, has to make this a sure fire hit for Xmas. Its few weak points are really only going to be a problem for those building a whole new home entertainment setup from scratch – as an addition to an existing system, there’s no faulting it.