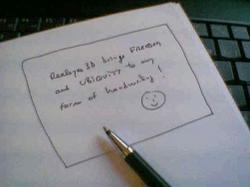 Another company exhibiting at last week’s Nokia World conference was Realeyes3D, which makes software for cameraphones. The company doesn’t sell it – instead, its business model is based on persuading handset makers to preload the software on their new phones.

It’s pretty nifty though. Among the apps on display was Phone2Fun Digitiser, which lets you scribble messages or drawings on paper, then take a picture of them with your cameraphone, and send a cleaned-up version of the image as an MMS message or email to friends.

“We’ve integrated it into the messaging clients of the new Nokia Series 60 3rd edition phones,” says Katia Hilal, business development and alliance manager at Realeyes3D. “When you click on New Message, you get the option of sending a handwritten message. And besides writing, it’s great for things like drawings or even maps, if you’re sending someone directions.”

An evolution of this technology is called Phone2Fun w-Postcard, which lets you take a normal photo, THEN do the handwriting thing and take a picture of that, and then combines the two so you have a photo with your scribblings overlaid on it – which you can then move around, make bigger or smaller, and change the colour of. 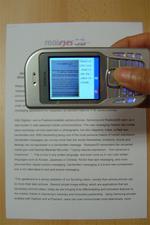 Realeyes3D also has a more business-like application called, er, Realeyes3D Mobile Scanning. Well, it does what it says on the tin: lets you use your phone’s camera to capture documents, notes, white boards etc, and then save them as photos within your handset, or send them on.

The company also has a technology that uses your phone’s camera as a navigation aid, using it effectively as a motion sensor, allowing you to tilt and move the phone in order to move around large documents, images or web pages. It could be a solution to some of the problems of viewing ‘proper’ websites on a phone’s screen, or alternatively as a neat navigation mechanic for mobile games.

Whether you can get your hands on Realeyes3D’s apps depends on how their negotiations with handset makers go, however. “Our business model is for preloading on handsets,” says Katia. “Particularly messaging applications are designed to be part of the messaging client on the phone, and very tightly linked in. It’s not an application that you download and then have as an item on your phone.”

Still, the chap who talked to Katia just before me worked for Nokia, and seemed very enthusiastic about the technology, so watch this space…

Flash wallpapers and games on your phone
Hands on with the Nokia 770 internet tablet
WidSets bring the best Web 2.0 sites to your phone
Video of Nokia’s future mobile concepts (part two)
Video of Nokia’s future mobile concepts (part one)
Are you a life juggler or a technology stylist?
Geek TV crosses Miami Vice and Dom Joly with YouTube and, er, breasts
Hands On talks football, mobile advertising, and its Mobizines rival
Refresh Mobile talk about their award-winning Mobizines
Fancy a 100GB mobile phone with a built-in projector?
Next-gen N-Gage to work on 5-7 phones from Day One
Nokia declares war on the iPod!
Ruud Gullit on gadgets and marriage: “It’s like warfare…”
Two mobile phones and one DJ Slow…
Nokia promises WiMAX handsets in 2008
Tech Digest goes to Nokia World