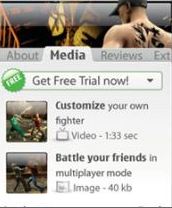 Interviewed at Nokia World, the company’s games chief Jaakko Kaidesoja said that when Nokia’s N-Gage 2.0 platform launches next year – and no, they’re not calling it that, I’m just trying desperately to coin a phrase – it will work on several handsets at launch. The new platform lets you play whizzy 3D console-style games on Nokia smartphones, with an Xbox Live style community wrapped around them.

“We are planning to support something like 5-7 devices when we launch,” he says. “Some of them are already being sold today, in fact. So if you have one of those devices, you’ll just have to go to our website, download the application to your phone. It’s like any Series 60 application, and it works.”

Nokia isn’t naming which phones will support the new games yet, although they’re using the N93 to demo them, so that’s probably one of them.

One thought on “Nokia World: Next-gen N-Gage to work on 5-7 phones from Day One”