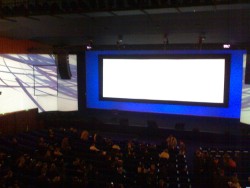 So, here I am in Amsterdam at Nokia World. Sadly, despite the name it’s not a post-modern amusement park where all the rollercoasters are shaped like N70s, and kids queue up to throw N-Gages at coconuts to win a prize. Although it’s a thought.

Instead, Nokia World is Nokia’s two-day conference where it unveils new phones, talks about its strategy and big visions, and invites a bunch of its partners to show off the latest cool stuff they’re doing on phones.

So, I’m sat here waiting for the keynote speeches to begin, having munched on a pastry and logged on first time to the free Wi-Fi. Which is nice. The lobby is bustling outside, lots of people here including journalists, Nokia people, and other mobile firms. I’ll be posting news, interviews and other gubbins throughout the show, so keep checking back to see what’s happening.