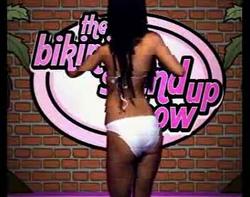 One such firm is Player X, which launches its Geek TV channel on December 4th. It’s a one-hour show that runs on a loop, with a new episode every week. It’s launching first on 3 UK, although Player X aims to sell it to the other operators too. Richard Morris, the company’s video product manager, told me a bit more about it.

“Essentially it’s unique selling point is it’s all made-for-mobile content,” he says. “There are great brands like Miami Vice and American Dad, but it’s new content exclusively for the phone. And then there’s a user generated aspect where we invite people to send in their clips, and if they’re good enough, we’ll air them.”

Apparently the reason operators like Geek TV is partly because it promotes videos that can be downloaded as individual episodes elsewhere on their portals. So you might see an episode of Player X’s new Miami Vice animated mobisodes on Geek TV, and then go and buy the others from the portal to download. 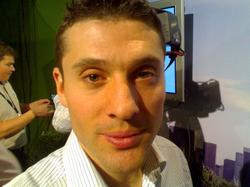 Richard (pictured) says Player X will be running themes and competitions to ensure the user videos are as good as possible.

For example, the company also produces video clips featuring TV prankster Dom Joly, so Geek TV will include some of those, along with a competition for viewers to send in their clips – via 3’s own SeeMeTV service – of them doing an impression of Dom’s phone man character (you know: “I’M ON THE TRAIN!”).

“If we like your clip, we’ll air it, and then the best ten will be judged by Dom Joly himself,” says Richard. “And then the winner gets to appear in his next series. And that’s the way you can cross promote from the TV channel to user-generated things like SeeMeTV, and the video-on-demand that’s available elsewhere on operator portals.”

Apparently you’ll also be able to send in larger video files via the Geek TV website too, although Richard stresses again that “it’s not about sending us your crap. We want good stuff!”. 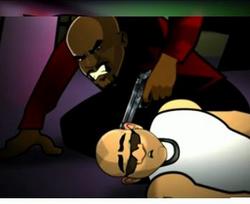 So as a company selling mobile video and TV shows, what’s doing well at the moment? Do the mobisodes based on famous brands like Miami Vice sell best, or the more original unique-to-mobile stuff? Interestingly, while more operators sign deals to sell the former on their portals, sales may actually be better for the non-branded stuff.

”Miami Vice isn’t necessarily our biggest seller, but it’s our most syndicated product,” says Richard. “Our biggest seller is something called Check My Tits, believe it or not. We don’t do adult – we do entertainment and that’s as far as we’ll go. But stuff that’s cheeky and not branded will do just as well if not better than branded stuff. Users are looking for something different and new.”

He’s also not impressed by some of the mobile video and TV that’s available elsewhere at the moment, not in terms of quality, but in terms of whether it’s right for the current audience who are watching stuff on their mobiles.

“You’ve got things like Cartoon Network and Nickelodeon out there, which is completely the wrong demographic for who’s actually paying for and watching this stuff!” he says. “The average age of viewers for those channels must be 6-8, it’s insane! Geek TV is catering for 16-24 year-olds, so it’s very focused, and very mobile savvy. Plus there’s the community aspect to it too.”