3 and O2 have announced that they’ve joined forces, bringing their two mobile video services (SeeMeTV and LookAtMe!) together to create what they claim is the UK’s largest open access mobile video community — EyeVibe.

Users are being encouraged to submit quality videos by enticing them with a cut of the download fee (10p per video) each time their content is accessed. Mobile users on flat rate data plans only have to pay for the clip, not any data charges, while other users will have to fork out additional data charges. 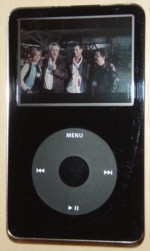 Orange has launched its Pay-Off contest and is inviting its customers to submit 10-15 second video clips of themselves either trying to prove that they’re the sexiest person alive (Face-off), are the best/craziest dancer (Dance-off), or are just plain weird but couldn’t muster a longer clip on YouTube (Weird-off).

The best videos are entered into a series of play-off rounds, where users vote for their favourite and the winner then has to face a new challenge – though what that is isn’t clear yet.