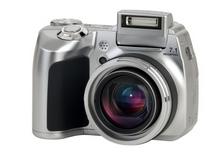 As one of the bulkiest members of Olympus’ digital camera line-up the SP-510UZ bridges the gap between an SLR and a compact. The ‘UZ’ part stands for Ultra Zoom because the part of the camera’s increased bulk gets you a stalker-friendly 10x optical zoom.

Other features include 7.1 megapixel image resolution, RAW image capture, a BrightCapture enhanced 2.5” LCD, electronic viewfinder and an range of ISO settings going up as high as 4000. Dimensions are 105.5 x 74.5 x 70 mm and the weight is a solid feeling 425g with batteries in.

Anyone stepping up from compact level will be pleased by the enhanced functionality the SP-510UZ offers. The command-wheel interface takes you through the usual scene modes and programmable settings, and then you have a manual aperture setting, Olympus’ unique shooting guide mode and also My Mode, which lets you create up to four different settings to swap between as you need them.

Pictures shot on most standard modes and just using the scene guides came out really well. Both skin tones and bright colours were reproduced remarkably faithfully and the flash did a decent job of providing adequate illumination in low-lighting without ever threatening to wash out the shots. More serious photographers will be pleased by the option to record in RAW format, which is a bit of rarity in cameras of this sort.

The SP-510UZ suffers from the Jack-of-all trades syndrome. When you start getting into the more serious and complicated aspects of photography, the performance starts to break down. The higher ISO levels are a good example; the ISO 4000 spec looks impressive, but when actually using this I found a lot of digital noise creeping in – which was often enough to render a photo useless. Setting the camera to the highest ISO, and using the Fine Zoom mode, automatically reduces the picture quality settings down, which is another pain.

The supposed ‘anti-shake’ system is similarly flawed – it isn’t your normal optical image stabilising. Instead this function simply ups the ISO setting so that the faster shutter speed reduces the blur. But then is in turn subject to the compromising levels of digital noise so its use is compromised.

Generally though, I came away with the feeling that things start-up times could have been better, continuous shooting could have been quicker along with the focus times, the screen could have been brighter too – and so on. No one problem is particularly worth singling out, but as a whole, it threatens to let the whole side down.

In the end, it feels like the camera has been stripped down in order to lower the price. Actually, it turns this tactic has worked out quite well for Olympus as its closest competitors, which boast similar feature sets and image resolution, are all just a little bit more expensive. This makes it pretty hard to pin down a final rating – I think many people will be able to forgive the camera’s shortcomings in favour of the improved image capture quality.

I expect it is better suited to budding enthusiasts wanting to shoot in a wider range of features than their current compact can manage, than seasoned photographers looking for all-round performance without the bulk of an SLR (or just trying to save a few quid). Prices vary quite wildly, but tend to linger somewhere around the £200 – £230 mark, which, as I said before, is quite reasonable.