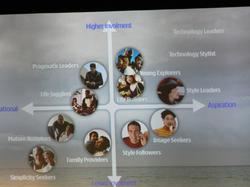 One of the interesting running themes of the Nokia World conference has been the way Nokia is splitting consumers (i.e. us lot) into 12 distinct segments, which are being used to help the firm design its new mobile phones.

The categories are based around what you do in your life and how you use mobile technology. This morning, the company’s VP of sales and marketing in Europe, Phil Brown, showed a slide with all 12 listed (click to see larger). Which one are you?

Sadly there’s no Crumpled Blogger category, so I think I fall between three or four of those. But that’s okay: in his presentation, Phil said these categories are not hard and fast, citing his own wife, who “is a life juggler, but thinks she’s a style leader. Obviously, I tell her she’s a style leader…”

More importantly, he also said that these categories are to be found across the world in ‘mature’ mobile markets. In other words, it’s not like everyone in Japan is a technology leader, compared to us style-focused Europeans. Although he did note some national differences with tongue firmly in his cheek.

“I’m not a racist, but… it’s fair to say there may not be as many style leaders in Germany as perhaps there are in Italy. But they’re still there in Germany, even if it’s a smaller number. And in countries like Sweden, there are lots of people in the bottom left of our graph [Simplicity Seekers and Mature Acceptors] who see themselves as very rational and maybe not so involved in the mobile life.”

Perhaps Nokia should rejig its categories along national stereotype lines after all. Us Brits could be Beery Hooligans, Emotional Repressors, or Men With Floppy Hair Who Say Gosh A Lot. If I see Phil later today, I’ll suggest it.

Other stuff. Nokia is running polls for many of the keynote presentations, where you can vote by text during the talk, and then the results are shown at the end. For Phil’s, the question was ‘What will be the most popular form factor for consumers in 2010?’, and the results were:

Oh, and lastly, I’m wondering if there’s some kind of unwritten policy within Nokia to avoid referring to Apple by name. Whenever they veer onto the subject of iPods or iTunes, they always talk about “companies from the MP3 space”, or “providers of entertainment on the internet” rather than just saying Apple.

Maybe I’m just reading too much into it, but it’s not unknown for companies to refuse to even mention their key rivals in public speeches. Which could mean that Nokia now sees its prime competitor in the years ahead being Apple, rather than the other mobile phone manufacturers…