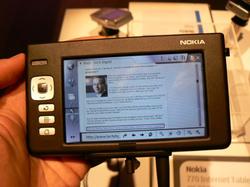 Slipping out of one Silicon Valleyspeak presentation today (“Push the envelope!”, “Innovation!”, “Quadrants!”), I took the chance to get hands on with Nokia’s 770 Internet Tablet. I hate the name – could it sound any more nerdy? – but the device itself is genuinely appealing.

It’s a lightweight landscape handset, designed principally for web browsing, messaging, and multimedia. It’s hard to say how it felt in the hands, as it was attached to one of those heavy security devices that stop journalists from walking off with brand new Nokia phones, but it did seem eminently pocketable.

Web browsing was pretty seamless, using a pop-up on-screen keyboard to type URLs in, with websites being reconfigured to fit the screen. Not all looked absolutely spiffing – *cough* Tech Digest – but it felt more intuitive than, say, the PSP’s web browser. 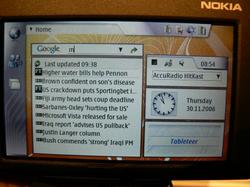 RSS seems to be playing a big role too, as there’s a mini-application dedicated to setting up your feeds, which can then be displayed on the 770’s home screen. It seemed like you had to know the exact address of a site/blog’s RSS feed though, rather than just the main address, which isn’t that user-friendly. But I might not have had enough time to find that particular option.

The device was playing radio too, although I’m a bit vague as to whether this was internet radio streaming via Wi-Fi, or FM radio with Nokia’s new station database saying what it was. Either way, it sounded good through the supplied pair of Nokia headphones.

I’m still not sure about the 770 though. Like I said, it’s an appealing gadget, but for many of its options – particularly messaging – I’d want a pop-out keyboard rather than an on-screen one that you poke at with a stylus. Maybe you can use a Bluetooth keyboard with it, but then that means carrying around two separate gadgets.