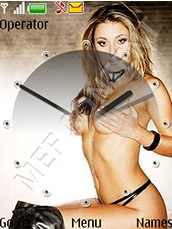 Just polishing off some more interviews from last week’s Nokia World conference today – there was so much happening at the show, I’m still working through transcripts. Let’s kick off with Mobile Entertainment Factory, a German firm that’s using Adobe’s Flash Lite technology to create animated wallpapers and games/applications for phones.

Dr Hubert Weid, the company’s CEO, ran me through a demo of the Flash wallpapers (pictured), which are cleverer than just having neat visual animations. One example was a wallpaper that actively links to your phone’s time setting, and displays it as an analogue on-screen clock – good for those of us who’ve stopped wearing watches in favour of using our phones.

“You could even have time-based wallpapers,” he says. “We could combine four different wallpapers in one Flash wallpaper, so your phone would display a different one in the morning, evening and night-time, without you having to change it.”

Mobile Entertainment Factory started life making Java games for mobile phones, but has recently diversified into Flash Lite games. Hubert says the two areas don’t really compete with each other, although he warns against the common assumption that Flash games are just simple one-button games with no depth.

“I wouldn’t say simple,” he says. “It’s more rich media. Of course, we’re just starting out, so it’s simple at the moment, but in the mid or long term that will change. We might not do sophisticated 3D shooters in Flash, but if you think about advertising games, this is the perfect tool. It’s much nicer and better to watch, and avoids the complications of Java.” 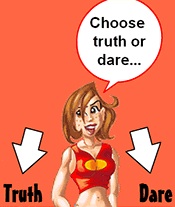 He showed me a few games, including a Spin The Bottle application – one for The Kids, I’m guessing – and a Simple Simon style memory game.

The games feature more flashy (sorry) visual effects than many mobile games, especially things like popping up speech bubbles or zooming in and out, which are easier to do thanks to Flash’s vector graphics.

Adobe’s Flash Lite player is making its way into more phones, particularly thanks to Nokia’s efforts. But it’s still very early days for Flash Lite games on mobile, not least because there’s nowhere to buy them.

“It’s very hard, because there are hardly any out there!” says Hubert. “As Flash players are pre-installed in more phones, the industry will wake up and start to see that there is new functionality here. But today, even the operator portals don’t know how they should handle Flash games.”

PREVIOUS NOKIA WORLD COVERAGE
Hands on with the Nokia 770 internet tablet
WidSets bring the best Web 2.0 sites to your phone
Video of Nokia’s future mobile concepts (part two)
Video of Nokia’s future mobile concepts (part one)
Are you a life juggler or a technology stylist?
Geek TV crosses Miami Vice and Dom Joly with YouTube and, er, breasts
Hands On talks football, mobile advertising, and its Mobizines rival
Refresh Mobile talk about their award-winning Mobizines
Fancy a 100GB mobile phone with a built-in projector?
Next-gen N-Gage to work on 5-7 phones from Day One
Nokia declares war on the iPod!
Ruud Gullit on gadgets and marriage: “It’s like warfare…”
Two mobile phones and one DJ Slow…
Nokia promises WiMAX handsets in 2008
Tech Digest goes to Nokia World

One thought on “Nokia World: Flash wallpapers and games on your phone”