Which? announces shortlist for the best consumer brands in 2021

Ford ‘Future car’ should be red, electric and be able to fly – say kids

Last.fm has had rather a bad day for PR, making two very big, very bad announcements for its consumers. First of all, the company announced in a forum post they’re removing access to their API for third party mobile applications. That means that users of Mobbler on S60, Pocket Scrobbler on Windows Mobile, and FlipSide on BlackBerry devices will soon find themselves without a way of listening on the go.

The ‘official’ applications for the iPhone and Android will remain in action, which seems a little odd. If this is a licensing problem, surely the same rules are in place for whatever platform the content is delivered on? Relatedly, the service will also be stopping non-subscribers from accessing the radio APIs, simply because Last.fm wants more money.

Secondly, the company also announced in a blog post that it will begin charging for its previously free service outside of three countries – the UK, the USA and Germany. Customers anywhere else will be charged a fairly slim €3 per month for the service.

What will remain free for all users is the scrobbling aspect of the site – where it charts your music taste and allows you to compare taste with friends and other users, as well as the social network that sits on top of everything. Although I’ve never pushed very hard to fill out my friends list on Last.fm, it’s grown incrementally over the years and now it’s not too bad.

I’m deeply disappointed that I’ll be losing access to Mobbler, even if it was a little rickety and didn’t work properly on the bus. Let’s hope that services like Slacker make their way over this side of the Atlantic sooner rather than later.

Last.fm forum and blog (via Gizmodo)

If your journey home last Friday involved traversing Liverpool Street station, you might have had some trouble. The London station was forced to close for an hour and a half, from 7pm, due to an 11,000-strong flash mob mimicking T-Mobile’s recent adverts featuring silent dancers.

Are you listening to music? Turn it down, or off for a moment. Now go visit @tweejay on Twitter, and sing along in your head for a moment to whatever’s at the top. Congratulations, you’ve just enjoyed the delights of Twadio.

It’s the first ‘silent radio station’, where every five minutes, a song is posted. Listeners who sign up are notified via @tweejay, and across the world, the same song suddenly gets stuck in millions of people’s heads. Brilliant, or an evil plot to get “U can’t touch this” in your head? Let us know what you think in the comments.

Last time we heard from WowWee, they showed Ashley a robot at last year’s CES. I guess they decided that there’s not much money in robots, because this year they’ve got a bunch of cheap, tiny, but remarkably attractive projectors instead.

From left to right, there’s the “Stick”, which takes SD cards, but also has some internal memory, the “Station”, which lets you both dock your iPod and display its contents, and the “Swivel” which has a 90° hinge, letting you project your videos skyward. It also packs a three-hour battery life, for those long sessions of lying on your back. No pricing or availability yet, beyond “2009”.

Find more CES coverage here. Tempted? I sure am. 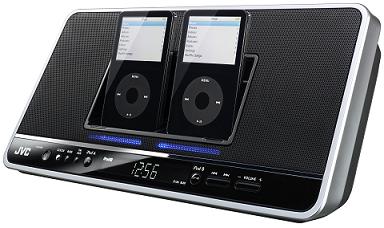 Honestly, I love JVC, but this product makes me think they’ve gone a bit cuckoo in the conception department!

I can understand that the average household has more than one iPod now, with both parties wanting to charge their ‘pods overnight and have equal play-time with the speakers. However, I just can’t get to grips with the NX-PN7… 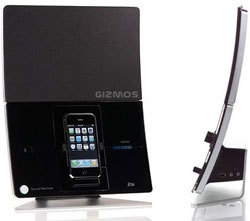 A new company, but old hands at this technology game. The Jibe Audio team includes Robert Brunner, who led Apple’s design team from 1989-1996 – and he’s keeping the Apple vibe going for the company’s first product – the Sound Machine iPhone dock. 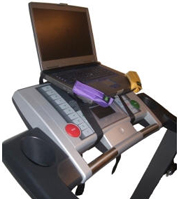 Let’s all blame Nintendo. That seems fairly reasonable, they’ve really kick-started this trend for exercising-whilst-gaming/brain-training/surfing the net, even giving other companies an excuse to cash in on the puzzling exercise trend.

$6,500 is an awful lot to spend on the Walkstation workstation which we saw a few weeks back, but for just $99, you can get a…

Bush has added to the large number of docking systems battling for your Christmas cash with the IP001, which, as you'd expect, plays your tunes whilst charging your player. Output is via 2 x 5W RMS speakers, which provide…