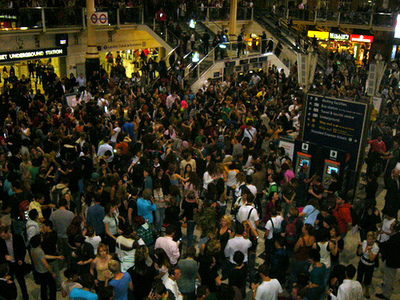 If your journey home last Friday involved traversing Liverpool Street station, you might have had some trouble. The London station was forced to close for an hour and a half, from 7pm, due to an 11,000-strong flash mob mimicking T-Mobile’s recent adverts featuring silent dancers.

The station and surrounding area became so packed that police were called to disperse the crowds and get dancers down from various bits of station furniture. This morning, the Facebook group which arranged the whole thing was messages suggesting that the station was too crowded to dance properly, and that peoples’ music couldn’t be heard over the screaming.

Those responsible have promised another event “soon”, and there’s a similar stunt, with different organisers, planned for another London station on 10th February. Will you attend? Did you go to this one? Let us know in the comments.