Last night, the Twitter accounts for Britney Spears, Barack Obama, Fox News, Facebook, the Huffington Post and 28 other decreasingly famous people were hacked to display a variety of messages, from spammy to hilarious.

It started with Fox News, who posted a message about one of their anchors, saying “Breaking: Bill O Riley is gay”. Rick Sanchez from CNN was then hit, with a message saying “i am high on crack right now might not be coming into work today”. Then Barack Obama (who hasn’t posted since the election) posted an affiliate marketing survey. Then Britney’s incredible missive came through. Find out that said over the jump (mildly NSFW). 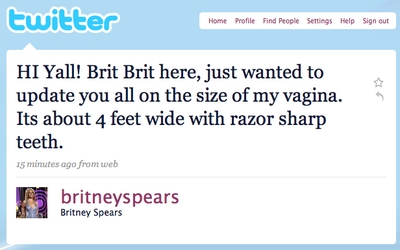 Terrifying. Here’s Twitter’s official explanation as to what happened:

The issue with these 33 accounts is different from the Phishing scam aimed at Twitter users this weekend. These accounts were compromised by an individual who hacked into some of the tools our support team uses to help people do things like edit the email address associated with their Twitter account when they can’t remember or get stuck. We considered this a very serious breach of security and immediately took the support tools offline. We’ll put them back only when they’re safe and secure.

Who did it? Well, TechCrunch claims it’s a user called Gmz from a hacking forum called Digital Gangster. It’ll be interesting to see what happens there. Will the person responsible get caught? Given that the hack involves such high-profile targets, including the President-elect, I rather suspect that the secret service are on this one. I wouldn’t want to be Gmz right now.