Baseball News and Rumors from the Globe

Facebook has launched legal proceedings in the US against a South Korean data analytics firm over allegations of data misuse. The social media giant said Rankwave ran apps on the Facebook platform and had been under investigation by the site over its compliance with Facebook’s policies, but had failed to co-operate with the firm. Facebook…
13th May 201913th May 2019 Chris Price Facebook, News

South Korea’s telecoms providers have turned on super-fast 5G mobile networks ahead of schedule in order to ensure the country beats the US to become the first in the world to launch the services. The carriers say 5G-enabled smartphones can download data 20 times faster than existing 4G devices, which in theory would enable users…
4th April 20194th April 2019 Chris Price 5G, News

As part of a special promotion, Samsung will apparently be giving its most loyal fans a free Galaxy S6, if they're able to show up with all of the previous phones. According to Chosun, customers will need present SK Telecom with everything from the original Samsung Galaxy S to last year's S5. That's 13 phones…
1st April 2015 James O'Malley Android, Mobile phones

A 15 year old boy has killed his mother and committed suicide after a row over online gaming escalated into violence. The unnamed student from Seoul, South Korea had got into a fight with his mother on Monday night after…

There seemed to be a real kerfuffle on the news this morning caused by a Cisco-sponsored survey which showed that UK finished 25th out of 66th in the broadband quality league table, lower that is than Bulgaria and Latvia. The amazing thing is that anyone was really surprised by our relatively lowly position.

The good news though is that could be about to change, albeit slowly, with Virgin now the only cable company on the block. It is rolling out a 50Mbps service while 24Mbps ADSL2+ services via BT and others are becoming more widespread. However, it seems there is still some way to go before we reach the average download speed of 11.25Mbps that’s needed to handle future applications such as High Definition Video.
Until then Britain will have to be content with the survey’s label of ‘Meeting Needs for Today’, the broadband equivalent of ‘must try harder’.

A South Korean company has successfully cloned five puppies from the frozen cells of a pitbull who died of cancer two years ago.

Bernann McKinney paid US$50,000 for the puppies, which are confirmed as Booger’s genuine clones.

This case is all quite sentimental, because it sounds as if Booger was a wonder dog who saved its owner’s life, and helped her recuperate from her injuries.

If your faithful old mongrel is starting to get a bit wobbly on his legs and is going off his food, rip out a lump of its hair and head to South Korea – where “dog cloning” is a genuine service.

Two competing South Korean labs offer the chance to recreate a dog for anything between $50k and $100k, although, of course, this isn’t just so Paris Hilton can keep the same puppy…

Sony launched its PlayStation3 console in South Korea over the weekend, hoping that the land of lunatic (“100 hours or DEATH!”) online RPG fans might take to its not-exactly-popular-anywhere-else new games system.

“Around 50” gamers queued for a PS3 in Seoul on launch morning, with Sony Asia boss … 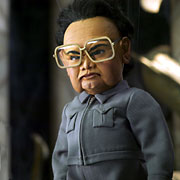 Well, well, well, it looks like Kim Jong-Il fancies himself as a bit of an ‘internet expert’. Funny that, considering most of North Korea doesn’t have electricity in the evenings.

Jong-Il recently met with the South Korean President, Roh Moo-Hyun (only the second time North and South Korean leaders have ever met), and one of their topics of conversation happened to be the internet. When Moo-Hyun broached the subject of allowing South Korean companies located within the North Korean…

How do you decide what new phone to buy? Well, it depends on whether you drink wine or beer. Whether you put your trousers or shirt on first in the morning. Whether you like handbags or console gaming.

A nifty touchscreen gadget in Samsung's Anycall Studio store in Seoul uses these questions to decide what phone you should buy. See how I fared in the video below (yes, I accidentally said I was a woman). It's hard to see this sort of tech appearing in Carphone Warehouse any time soon, but you never know…