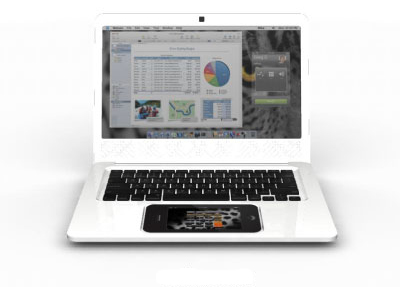 Are you ready for the unholy matrimony of two of the year’s biggest technology trends? That’s right – soon you’ll be able to turn your iPhone into a Eee PC-style netbook. Simply slot your iPhone into the space where the trackpad normally sits, and then enjoy all your applications with a full mechanical keyboard and 8.9″ screen.

It’s a little bit reminiscent of the ill-fated Palm Foleo, which could have been the first netbook, but was instead cancelled after a wave of criticism along the lines of “but no-one would want to carry a tiny notebook computer around!”. I bet Palm are cursing the Eee PC every day.

Back to the OLO, though. The device seems to be running some version of OS X, though it’s likely that it’s just a Photoshop mockup at this stage. The iPhone’s touchscreen will presumably be used as the trackpad itself, which presumably means you’ll need to install some sort of application to make it go. Given the external display, I would imagine the OLO would carry its own rechargeable battery. I’d also hope that would charge the iPhone’s battery, after all the issues people have been having with the jesusphone’s battery life.

There’s already a device that does something similar for Windows Mobile – the (rather ugly) RedFly. That doesn’t let you slot the device in, however. It uses a cable, or bluetooth instead.

OLO Computer’s website doesn’t feature anything on it except a picture of the device and a “coming soon” message. When more info does show up, and assuming the OLO doesn’t get gazumped on Wednesday by a real Apple netbook, we’ll pass all the details on to you. Promise.