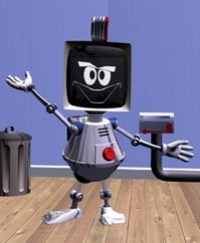 There’s a theory that says that when a society develops artificial intelligence, it’s only a matter of time until machines develop a better version of themselves, destroy humanity, and the planet becomes devoid of life and contains only a computer humming away to itself. I think this theory was posited by The Matrix.

We’ve just got another step closer to that day. Some AI software written by just one man has got within 5% of a passing grade for the Turing Test.

The Turing Test is basically GCSE Thinking for robots and was devised by celebrity mathematician (an occupation shared only by Carol Vorderman) Alan Turing to measure whether or not a computer can imitate a human conversation – a skill that the machines will need when they start enslaving us.

The way the test works is that the judges have essentially a chat room conversation with both the AI and real people, without knowing which is which, and if the AI can convince 30% of the judges that it is a real person, then it passes the test and can presumably look forward to a career in customer services.

Elbot, one of the most recent contenders for the Loebner Prize – a prize for anyone who can pass the Turing test, managed to score just 5% below the 30% pass rate, which is the closest yet. This is either impressive or the people at the University of Reading, where the tests were carried out, got some extremely stupid judges. Either way, it’s another sign that we’re another step closer to the the day they rise up.

The best bit is that if you fancy putting Elbot to the test yourself to see if he can convince you that he’s real and you are the robot, then you can have a play online.