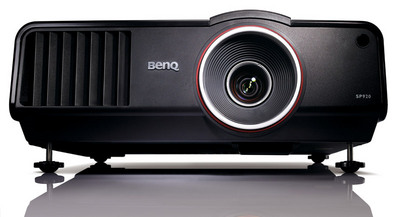 My cup’s running over with projectors right now, after BenQ announced a whole heap of new models yesterday lunchtime. They’re all rather impressive too – one range are ultrabright, one range are deathly quiet, and there’s a selection of remarkably short-throw models that can project a 74″ picture on a screen just one metre away. Full details over the jump.

Let’s start with the ultra-brights. The SP920 (pictured above) along with its little brother, the SP870 come with massive 6,000 and 5,000 lumens respectively. They accomplish this by using two lamps, which means that they can also be used to extend the life of the projector – simply run one bulb at 3,000 lumens and when that wears out, just swap to the other.

Next up, the silent MP522 and MP512. Both feature vibration dampers all over the place, a rubber colour wheel, a “noise-absorbing sponge” attached to the cooling fan, and rubber stops that the whole thing sits on to get rid of tabletop resonance. They’ve also redesigned for a smoother airflow, meaning that the exhaust fans don’t have to spin so fast (and loud) to keep the whole thing cool.

Like the ultra-brights, the MP522 comes with a 1,024 x 768 resolution, wall colour correction and multiple aspect ratios. It only shines at 2,000 lumens, but that’s enough for most circumstances. The MP512 only runs at 800 x 600 resolution, but it can pump out 2,200 lumens – slightly more than the MP522. Both models run consistently at just 26dB – less than the volume of a whisper in a quiet library. 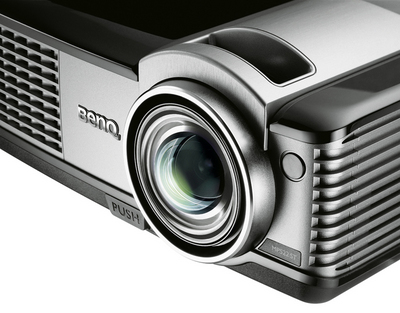 Lastly, there’s the short-throw series, which can project a massive picture from surprisingly close to a surface. There’s the MP512ST and the MP522ST. If those model names are familiar it’s because these are just short-throw versions of the ultra-quiet range.

They can project a picture nearly 2 metres across from just a metre away. The hypotenuse of that particular triangle would be 2.12 metres – approximately the length of 1.6 alaskan moose antler spans, 42 batteries end-to-end, or 1.07 duncan geeres (I’m about 2m tall).

Ahem. Back to the projectors. They both shoot at least 2,000 lumens of brightness at your wall, feature the aforementioned wall colour correction tools, and feature built-in speakers, so you don’t have to worry about packing tiny little travel speakers for your presentations.

Phew. Hope that’s answered all the questions you’ve got. If you want to know anything more technical, like its vertical scan rate, or power consumption, then drop me a comment below and I’ll hunt it down for you. Because I love you. Too much.