BenQ claims the screens boast the lowest power consumption rating in their respective size categories, making them appeal to cost- and eco-conscious corporate users. The panels are 100% mercury-free, which is a significant ecological advantage over traditional CCFL displays, great for corporate users seeking to proactively comply with changing environmental regulations. LED technology also enables the G-Series to use substantially less energy (approximately 60% less in G920WL and 43% in G922HDL) than CCFL displays of the same screen size.

BenQ today launched their tiniest projector to date. The sultry GP1 is a lampless, PC-less portable projector with a USB port. It’s not as small as the Acer K10 Pico Projector and not as cheap as the Samsung SP400B, so what has little projector got to offer.

Well it can project an automatically keystone corrected image up to 80 inches, that’s a 6 ft 8 inch image! That’s bigger than Peter Crouch! Bigger than Michael Jordon! On your wall! In your house! Exclamation mark!

The GP1 does away with unwieldy video ports, opting instead for one consolidated breakout cable for your traditional composite and VGA cables. The GP1 also flexes a nigh-on pointless 2 watt speaker. But at just 12cm x 13cm x 5cm and weighing just 640g, who can argue if it’s a little hard to hear, its got plenty of audio outputs after all.

What the GP1 has over its competitors is its in-built media player which allows for playback of video found in a plugged in its USB. You can even play your PowerPoint presentations without having to hook the GP1 up to a computer. No bad.

But at a whopping £499, a full £150 more expensive than SP400B, the BenQ might struggle in an already busy market.

Display manufacturer BenQ looks like it’s branching out – it’s announced two all-in-one PCs. There’s an 18.5″ model, as well as a 21.5″ one. Let’s look at the former first.

The i91 (pictured above) has a 16:9 widescreen display, with an AMD Sempron 210U processor, 1GB of RAM and a 160GB hard drive. That’s not too impressive, really. There’s a a webcam and a card reader, too.

Sat on the bottom-right of the display, though, is a whopping great big hi-fi-style knob for adjusting the volume, and shutting down the PC. Interesting move. It’s evident that this is being pitched for a multimedia market, then.

Then there’s a slightly larger model, the 21.5″ i221. No word on any detail on that yet though, and no word on release dates or price for either model. Oh well.

My cup’s running over with projectors right now, after BenQ announced a whole heap of new models yesterday lunchtime. They’re all rather impressive too – one range are ultrabright, one range are deathly quiet, and there’s a selection of remarkably short-throw models that can project a 74″ picture on a screen just one metre away…

I’ve just got back from a delightful lunch with BenQ who wanted to show off a range of new monitors they’ve got coming out later in September. There’s the E-Series, and the M-Series, both of which you can see in the above video. There are 22″ and 24″ versions of each…

BenQ has announced two new widescreen monitors in its WT range, both offering versatile adjustment of height, tilt, and rotation.

It’s been a while since we’ve seen a BenQ product, but the company has come out in top form with the launch of the E72 smartphone. Running on Windows Mobile 6, it’s aimed at the low-end market.

One attractive feature about the E72 is that it’s the first mobile with an integrated IM client that will allow you to chat on MSN Messenger, Gtalk, Yahoo, ICQ, AOL and Jabber. Whilst it lacks 3G internet capabilities, it does have Wi-Fi for browsing in your local hot-spot, and the usual WM6 programs, such as Outlook email…

BenQ will launch the latest addition to its JoyBook notebook PC series, with the R45. It offers an extra-bright 14.1-inch widescreen (1,280 x 800) display — thanks to BenQ’s UltraVivid technology that pushes out 200 nits of brightness — and is powered by a 2.1GHz Intel Core 2 Duo processor with nVIDIA GeForce® 8400M G GPU…

Looking for an LD monitor? Specifically a 24-inch one? Need it to be super-slim? The BenQ V2400W awaits you… 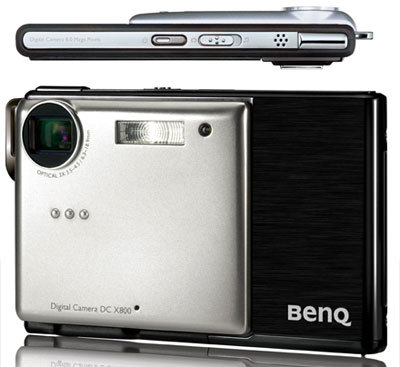 Can digital cameras get any more slimline? Well, yes they can – this BenQ DSC X800 comes in at just 9.8mm at its slimmest point.