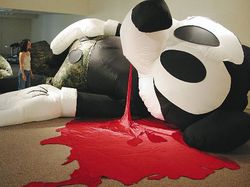 Just to clarify: that’s not one individual mouse – such as a cheeky, fun-loving rodent inhabiting said analyst’s house, much to the annoyance of his hapless, accident-prone cat. No he’s talking about the humble computer mouse, invented back in 1963 by Douglas Engelbart and probably now attached to over a billion personal computers even as I type this. No matter; Garter analyst Steve Prentice reckons that their final days will come in the next 3-5 years.

His reasons? Notebook PCs for one. Yep, trackpads are a decent alternative and the increasing number of laptops around will turn the tide against separately bought peripherals. But although trackpads are a lot better than they used to be, when you need something with a bit of precision, you still need a mouse.

What about new face recognition technologies, such as those being touted by Sony and Canon? They can “recognise your face in real time,” Prentice explained, “[…] even when you smile.” Fantastic. Tell me, what is the facial command for scroll down? Ooh is angry eyes the shortcut for Undo?

Panasonic has another solution. It’s pioneering a system to replace remote controls that will recognise where you point your hands. Dunno about you, but clever though that sounds, I don’t actually want the telly to change channel whenever I lean off the sofa to violently gesticulate my annoyance at Bill Turnbull’s smug gob via the medium of a middle finger. I’m kidding, Bill. Your delightful, casual flirting with Carol Kirkwood is just what I need to get the venom flowing in the morning. Beats coffee anyway.

Anyway, what the hell? That’s spelling the end of TV remotes, not mice. And let’s face it, given the ease with which you misplace TV remotes and the speed at which they multiply, the writing has been on the wall for them for years. Last time I checked, you don’t spend your life hunting for mice down the side of the sofa.

I’m sceptical, not because I’m naive enough to think that mice will be around forever, but because the time scale is way off. As Logitech points out, over 500 million mice have been sold in the last 20 years and though there are increasingly sophisticated alternatives, evolution of mouse technology has far from ground to a halt. They are still the most precise human interface device around and, according to my now somewhat out-of-date Razer Copperhead, they are still getting better. The only problem seems to be fitting enough buttons on them to do away with that archaic keyboard nonsense.

Ahh, but maybe it’s a matter of software design. I somehow can’t see Microsoft making an operating system so accessible it negates the need for a mouse in the next twenty years, let alone 5. No, don’t even bother mentioning their touchscreen plans. My eyesight is already shot to shit by peering at my computer screen 14 hours per day. I really don’t need some genius to move it even closer to me just so I can jab it with my fingers to get anything done.

It’s going to take something far less gimmicky and far, far more ubiquitous than any rival tech we’ve seen so far to displace the mouse from its top spot, and that won’t happen for long time yet.