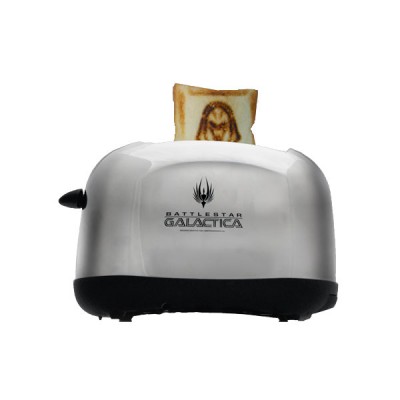 The Sci-Fi Channel has created a special limited edition run of Battlestar Galactica toasters for the San Diego Comic-Con. The smoothed lines and polished finish tie in neatly with the re-imagined series’ Cylon concepts, and it sports the Battlestar Galctica branding. However, the lack of a red light slowly panning from side to side accompanied by a sinister hum feels like a very serious oversight. Come on, how much extra would a few red LEDs have cost?

There is one neat trick up its sleeve though – the toaster will brand your toast with the image of a Cylon Centurion. Imagine that staring out at you from the depths of your marmalade. We’re also hoping for a three-barrelled automatic weapon attachment to be released later.

You can pick them up from the Sci-Fi store for $65 (around £32); shipping begins at the end of the month.

Related posts: A see-through toaster | A phone that looks like a toaster