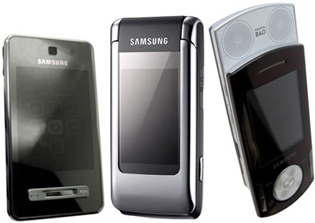 Stories are flying thick and fast across the blogging networks about Samsung possibly announcing more than a dozen new handsets this week at MWC. Until they’re officially confirmed, we’ll just show you a couple that are the most impressive – the F480, G400 flip and F400.

If you’re looking at the F480 on the left there, and thinking it looks familiar, you’d be right, as it’s basically the Armani-branded handset from 2007, minus the actual Armani branding. At 11.5mm thick and with a 2.8″, 240 x 320 touchscreen, it also adopts the Croix four-way tactile interface made famous by the F700 ‘Croix’ and Armani handsets. It’s also 3G with a 5-megapixel camera and LED flash. Expect this one to drop around April or May, with a price range of €350-€400.

Squeezed between the F480 and F400, the G400 flip has ‘Dual Touch Chic’ according to the manufacturer, and touchscreen internal and external displays. 5-megapixels, an FM radio and 100MB of storage with a microSD slot within its all-metal casing should be enough to satisfy the average user, and when it launches in May/April it will reportedly be €300.

Last but not least, the F400 on the right is Bang & Olufsen branded, and yep, those two circles shown on the slide-out silver bar are B&O speakers. Something for all public transport-users to look forward to.

Surprisingly it has 3G capabilities, with a 2.2″ QVGA screen, microSD slot and FM radio. Expect this one to set you back €370-390 in late March.

Samsung (via Mobile Review via Engadget)